Peek at the Beauty of the Charm of Lake Toba -->

Peek at the Beauty of the Charm of Lake Toba 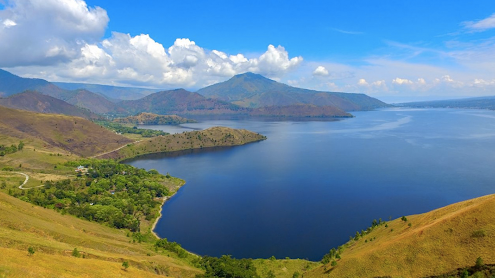 Travelers have been to Lake Toba? This lake with incomparable beauty has become one of the Super Priority Destinations (DSP) located in the province of North Sumatra. Lake Toba is also an attraction in developing storynomic tourism as a tourism promotion strategy in Indonesia.
According to scientists, Lake Toba is the largest volcanic lake ever. Lake Toba is believed to have been formed by the massive eruption of Mount Toba which occurred about 74,000 years ago. Scientists from NASA (United States Space Organization) believe that when Mount Toba erupted, about 60% of living things on earth perished. This world-famous Indonesian tourist attraction has an area of ​​1,145 square kilometers with a length of 100 km with a width of 30 km and a depth of 505 meters. In the middle of the lake there is Samosir Island which is almost as big as Singapore.  This also makes Lake Toba the largest lake in Indonesia.
Lake Toba is inseparable from fairy tales or legends that develop in society. According to local stories, once upon a time there was a husband and wife who had a son named Samosir. One day, a father named Toba was angry with Samosir and accidentally told him that Samosir was actually the son of a fish. Samosir was shocked and complained to his mother. This made the mother very sad because her husband broke his promise not to tell the origin of the child who turned out to be from a fish. Hand in hand, Samosir and his mother disappeared in an instant.
Then from the former footing of Samosir, the water came out so fast that it flooded the surrounding area. So much water, this puddle became a lake. Until now, the lake is called Lake Toba and the island in the middle is called Samosir Island.
With natural natural formations, the natural splendor of Lake Toba certainly does not need to be doubted. Friends can enjoy the beauty of Lake Toba by land and sea vehicles. If you want to get around Samosir Island and Lake Toba, you can rent a tour boat that has a unique shape in the form of a Batak traditional house. In addition, you can visit various other tourist attractions such as Batu Hang, Bung Karno's exile house and also the Situmurun waterfall if you choose to use a ship.
However, for travelers who choose to use land transportation, you can rent a motorbike there when visiting tourist attractions on Samosir Island and around Lake Toba. Not only enjoying the beauty of the lake, there are several tourist attractions that you must visit such as Pangururan hot springs, Simanindo Traditional Village, Siallagan Stone Court and many more.
Camping at Holbung Hill is an exciting activity that will not be forgotten when a Traveler visits Lake Toba. Holbung Hill is in Tele Village. There are two paths to get to this place. First from Medan directly to Tele via Kabanjahe. Another route is via Siantar via Parapat then Samosir. At the location before climbing the hill there is a counter to pay the levy, after which the traveler will be immediately invited to climb this hill.
Lake Toba is also the best sports tourism spot in Indonesia. Water sports that are usually done on Lake Toba are kayaking. Kayaking on Lake Toba provides a different sensation. The currents of Lake Toba are calm in the morning, so a traveler can kayak leisurely while looking at the beauty of the hills from the surface of the lake. Some inns in villages on Samosir Island usually also provide kayak facilities for rent.
Sports tourism that you can do in the tourist area of ​​Lake Toba besides kayaking is cycling. Cycling around Samosir Island. With a stretch of green hills, cool air and far from urban pollution, it becomes a very fun activity to do.
#DESTINATION #NATIONAL
Bagikan
Komentar