Enjoy the Excitement of Adventure in Goa Gong -->

Enjoy the Excitement of Adventure in Goa Gong 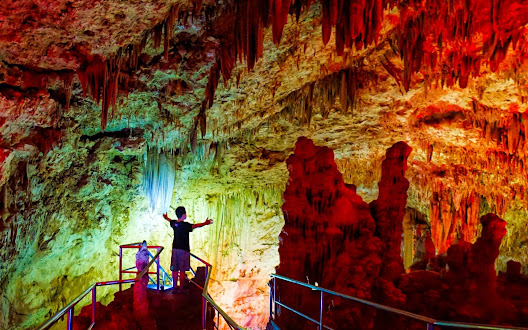 Pacitan City 1001 Goa, That's the nickname of one of the cities located in the southwest of East Java Province. The nickname of the city of a thousand and one caves, is not just an ordinary nickname, because there are indeed a lot of caves in Pacitan district, such as the Langka Luweng Cave, Tabuhan Cave, Putri Cave and many more. One of the most popular caves in Pacitan is Goa Gong.
Goa Gong is one of the tourist attractions in Pacitan which has a very amazing natural beauty. The exotic panorama offered by Indonesian nature tourism is touted as one of the most beautiful caves in Southeast Asia. The beauty of Goa Gong lies in the beauty of the Staglatites and Stalagmites that form naturally on the ceiling and bottom of the cave.
Adventure in Goa Gong, you will be presented with the exotic structure of stalactites and stalagmites that are formed naturally. This cave emerged as a result of volcanic activity and thermal movements that are thought to have taken place hundreds to thousands of years ago. Inside this cave is divided into several rooms that present a variety of natural stones, ranging from marble that can be seen through and is claimed to be the largest and most beautiful marble stone in Asia. On the ceiling of the cave, you can still see water droplets which indicate the process of forming stalactites and stalagmites is still ongoing.
Caves that usually look dark and haunted, but this is not the case in Goa Gong. This is because in the cave there are several supporting tools such as decorative lights, fans and stairs with handles made of iron that will make it easier for you to explore this cave. Decorative lights are used for lighting as well as beautifying the colors of Staglatite and Stalagmites in the cave, Fan to circulate the air so it doesn't feel stuffy when in the cave.
Goa Gong Pacitan has its own uniqueness, which is located on one of the stones in the cave, when the stone is hit it will make a sound like a traditional musical instrument, namely Gong. This uniqueness is what makes this cave named Goa Gong. Based on local stories, this cave is called Goa Gong because in ancient times the surrounding community often heard the echo of wasps like the sound of gongs coming from inside the cave. It is said that Goa Gong was originally discovered by a local resident who wanted to find a water source.
Goa Gong is located in Pule Hamlet, Bomo Village, Punung District. From downtown Pacitan, this cave is located just to the west with a distance of about 40 Km. To get to Goa Gong you will pass a winding road dotted with hills with several caves in it. The caves in Pacitan district are generally formed from the type of karst rock, black stone with a hard texture.
The journey to this cave is relatively easy, you can use transportation such as a car or bus. If you want to take a bus to Pacitan, you can get off at Punung Market then look for an angkot that goes to Punung or you can also use a motorcycle taxi at the base around Punung market.
Arriving at the Goa Gong area, you have to walk approximately 100m from the parking lot to the entrance of the cave, you will also find many people selling lined up on the side of the road before entering the mouth of the cave, they sell their wares such as agate, typical Pacitan clothes, food special and much more.
#DESTINATION #NATIONAL
Bagikan
Komentar