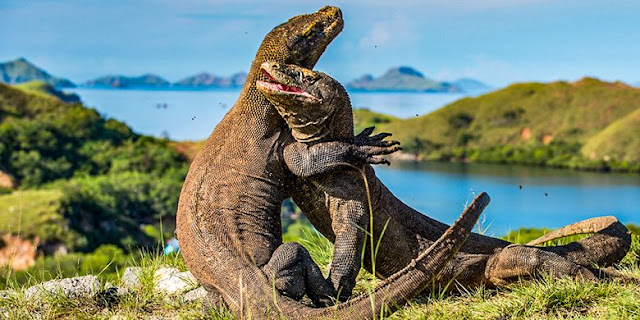 Komodo Island, which is the original habitat of ancient Komodo dragons, seems to be a favorite destination visited by tourists, not only domestic tourists, many foreign tourists are also curious about this place. Many people flock to these islands just to see firsthand the behavior of these extinct animals.
The name of Komodo Island is the Dutchman, Steyn Van Hens Broek. This story begins with him hearing reports of a large dragon-like beast on the island and proving it. While exploring Komodo Island, he documented and published it at the Bogor Museum.
The management of Komodo National Park is managed by the central government. This national park consists of 3 large islands, namely Komodo Island, Rinca Island, Padar Island, and several small islands.
This National Park was established to protect the Komodo dragon and its habitat. There are hundreds of animal species which are a mixture of Asian and Australian animals. There are 25 species of protected animals, due to their limited number and distribution.
The tourist attraction of Komodo Island is not only seeing Komodo dragons. The panorama of the savanna and the underwater scenery is the main attraction. There you can also do fishing, snorkeling, diving, canoeing and canoeing. There we can also do hiking and camping with friends.
Komodo Island was named the 7 wonders of natural heritage in the world by the new7wonders organization in 2013. Other wonders include Halong Bay (Vietnam), Amazon (Latin America), Jeju Island (South Korea), Table Mountain (South Africa), Iguazu Waterfall ( Latin America) and the Puerto Princea Underground River (Philippines). The decision was made by the president of the New Seven Wonder Organization, Bernard Weber at Komodo National Park on September 13, 2013.
If you have never been to Komodo National Park, pose at the "Must Pose" spot or a million people spot on one of the 3 main islands in this national park. The contour of the curve of Padar Island when viewed from its peak is small during a storm. It's not hard to go up or down, but it's not easy either. The character of the tracks on the islands in Komodo National Park is almost the same, in the form of rocky gravel soil that is sometimes slippery and there are no trees. But don't worry, those who are fit, both middle-aged and children over 5 years old can do it.
One of the other view points in Komodo National Park is the hilltop of Gili Lawa Darat. Not as spectacular as Padar Island but also a pity to miss. Because the road is very open, along the way we can often stop and look back, see the scenery. cool i swear! So those who feel tired or just looking at the scenery in the middle of the track are also okay. But for the strong, of course, you have to go up, because the view from above is a little different from the angle. Here we can also see the sunset. The duration of the trip is 30-45 minutes depending on whether or not you stop frequently.
Pink Beach on Komodo Island is very famous. Yes, what else if not for the pink sand. Although some are a little disappointed, how come the pink color is not as imagined. The pink color is indeed more visible if we observe carefully, or even from the top of the hill when the sun is hot. In addition to seeing the pink hue, head up the hill to either the left or the right for a panoramic view of the beach! Choose right or left hill? Both are worth it! But if you have to choose, in terms of scenery, choose the hill on the left (the direction of seeing it from the sea) but in terms of lighter and shorter, choose the right one.
Once the sun disappeared behind the horizon, flocks of bats resting in the trees on Kalong Island during the day began to scatter to decorate the sky. From the charter boat we can take pictures of this moment until we are satisfied. If the ship docks near this island, the next morning at sunrise we can again see thousands of bats flying back to the island, after looking for food.
#DESTINATION #INTERNATIONAL #TOUR
Bagikan
Komentar