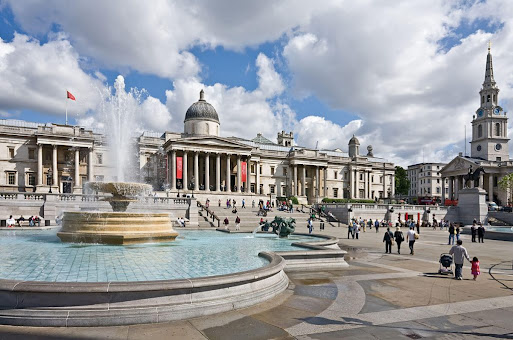 Trafalgar Square is the square in central London used to commemorate the battle of Trafalgar. This battle was a naval battle in which the British Navy battleships won the Napoleonic Wars. The name of the Field commemorates the Battle of Trafalgar, the British naval victory in the Napoleonic Wars over France and Spain that took place on 21 October 1805 off the coast of Cape Trafalgar.
This place holds various galleries and historical monuments to statues. Visitors can enjoy the many events and festivals held in this place with friends and family.
The sites around Trafalgar Square have been important landmarks since the 1200s. For centuries, the measured distance from the Charing Cross has been a marker of location. The current site of the square previously contained the intricately designed enclosed courtyard, King's Mews. After George IV moved the mews to Buckingham Palace, the area was rebuilt by John Nash, but progress was slow after his death, and the square did not open until 1844.
Nelson's Column is 169 feet (52 m) high in the center guarded by four lion statues. A number of statues and memorial statues occupy the square, but the Fourth Fourth Plinth, left empty since 1840, has played host to contemporary art since 1999. Notable buildings overlooking the square include the National Gallery, St Martin-in-the-Fields , Canadian House, and South African House.
The square has been used for community gatherings and political demonstrations, including Bloody Sunday in 1887, the culmination of the first Aldermaston March, anti-war protests, and the campaign against climate change.
Tourists flocked there, tour buses circled the central monument and political activists gathered to demonstrate. Every December, Norway donates a magnificent Christmas tree to thank the British for their role in liberation from the Nazis and is erected in the square. The Christmas tree is erected for twelve days before and after Christmas Day. The square is the centerpiece of the annual New Year's Eve celebrations. It was famous for wild pigeons until their transfer in the early 21st century
Trafalgar Square is owned by the Queen on the Right of the Crown and administered by the Greater London Authority, while Westminster City Council owns the streets around the square, including the promenade on North Terrace. The square has a large central area with a highway on three sides and a terrace to the north, in front of the National Gallery. The streets around the square are part of the A4 , the main street that runs west of the City of London. Originally having a highway on all four sides, traffic traveled in both directions around the square until a one-way clockwise rotating system was introduced on April 26, 1926. Work completed in 2003 reduced the width of the road and closed the north side to traffic. . .
Nelson's Column is located in the center of the square, flanked by a fountain designed by Sir Edwin Lutyens between 1937 and 1939 (the successor to Peterhead's two granite, now in Canada) and guarded by four monumental bronze lions sculpted by Sir Edwin Landseer. At the top of the column is a statue of Horatio Nelson, who commanded the British Navy at the Battle of Trafalgar.
Around the square are the National Gallery to the north and St Martin-in-the-Fields Church to the east. To the east is also the South African House, and across the square is the Canadian House. To the southwest is The Mall, which leads to Buckingham Palace via Admiralty Arch, while Whitehall is to the south and the Strand to the east. Charing Cross Road passes between the National Gallery and the church.
The closest subway stations to Trafalgar Square are Charing Cross and Leicester Square. London Underground's Charing Cross Station on the North line and Bakerloo have exits on the square. The line has a separate station, from which the Bakerloo line one was called Trafalgar Square until it connected and was renamed in 1979 as part of the construction of the Jubilee line, which was transferred to Westminster in 1999. The other closest subway station is the subway station. The embankment that connects the sub-district line, Lingkar. , North and Bakerloo, and Leicester Square on the North and Piccadilly line.
Within walking distance of Trafalgar Square, you can easily shop at Covent Garden, dine in Chinatown, see popular shows in the glittering West End, walk down Whitehall to Parliament Square to see the Houses of Parliament and Big Ben, and walk. Mall to Buckingham Palace.
The base of the statue has four bronze relief panels made from captured French cannons. They describe the Battle of Cape St. Vincent, the Battle of the Nile, the Battle of Copenhagen and the death of Admiral Nelson at Trafalgar.
The four bronze lions at the base of the mast were designed by Edwin Landseer and added in 1868. Guests are allowed to climb to the base of the statue for photo opportunities but are not allowed to sit on top of the lions.
#DESTINATION #INTERNATIONAL
Bagikan
Komentar