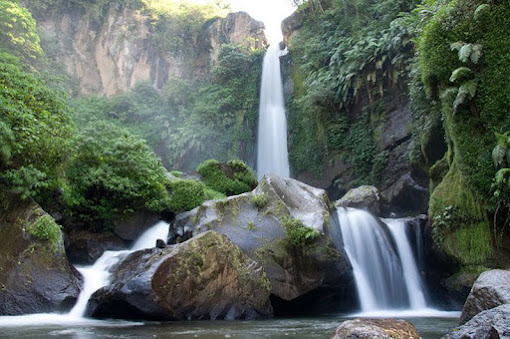 Coban Rondo is one of the natural attractions in Pujon District, Malang, East Java. The name Coban Rondo itself comes from the words Coban which means Waterfall and Rondo which means Widow, so named because there is a legend of a newlywed couple named Dewi Anjarwati and Raden Baron Kusumo who wanted to travel to Mount Anjasmoro. Dewi Anjarwati because their marriage age has just entered Selapan (36 days in Javanese).
However, they persevered and eventually there were dangers along the way. Out of nowhere, appeared Joko Lelono who was captivated by the beauty of Dewi Anjarwati. Fights are unavoidable. Raden baron Kusumo then ordered his clown to hide Dewi Anjarwati in a coban (waterfall) and finally fought with Joko Lelono. In the second death, Dewi Anjarwati became a widow (rondo). Until finally, Dewi Anjarwati's hiding place was named Coban Rondo.
Did you know that Coban Rondo Waterfall is already very famous among tourists, this is because of its natural beauty and also the coolness of the waterfall that you can feel. Coban Rondo actually means waterfall in Javanese. Coban Rondo's natural beauty is guaranteed to hypnotize anyone, including you.
There used to be a lot of monkeys at the location of this tourist attraction, but now they are no longer, so you don't have to worry. Coban Rondo Waterfall originates from Cemoro Dudo on the slopes of Mount Kawi and has a height of 84 meters with water discharge ranging from 90 liters per second in the dry season to 150 liters per second in the rainy season. Even though the dry season hit, the waterfall discharge in Coban Rondo was still heavy. Did you know that this waterfall comes from the slopes of Mount Kawi or more precisely, it can be said to come from the Cemoro Mudo spring.
Apart from being a family tourist spot, Coban Rondo is also often used for camping, so don't be surprised if you see tents in certain areas here. Coban Rondo waterfall is also very cool and the scenery around it is very beautiful, this is also because you can see many pine trees that grow so high that it adds to the exoticism of Coban Rondo. In addition to the green forest and cool air, you can also feel the cold water flowing from Coban Rondo Waterfall.
The current era of globalization has also affected this tourist attraction, this can be seen from the several facilities available. The facilities available are now very good and also very adequate, guaranteed you will feel at home for a long time to enjoy the cool natural beauty and also away from the noise of the bustle of motorized vehicles. You will find peace here.
The facilities available are in the form of a cafe that you can use as a place to rest and also fill your stomach after tired of walking and also playing water. Other facilities include several outbound games, and a camping ground is also available. Of course, this facility is very suitable, especially if you want to spend the night at this Coban Rondo tourist attraction.
Access to Coban Rondo Waterfall is also fairly easy, from Malang City it takes about 45-60 minutes of travel. Meanwhile, those who are already in the Batu area can travel approximately 10-30 minutes. And for the entrance ticket to the Coban Rondo area, a levy of IDR 16,000/person is charged.
#DESTINATION #NATIONAL #TOUR
Bagikan
Komentar