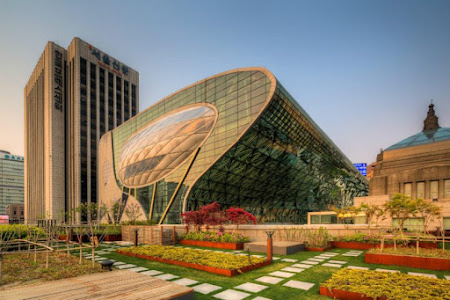 Seoul City Hall is a renaissance-style building that was founded in 1926. This place is a historical place for the people of South Korea.
This place has also been a place to watch thousands of football fans during the 2002 World Cup match. In addition, in this place there is a beautiful grass square. This place is also often used to hold various famous festivals.
Originally built as the Gyeongseong or Keij Capital Government Office in 1925, during the Japanese occupation of Korea, it later became the Seoul City Hall building after independence. The building imitates Imperial Crown Style architecture, and served as the town hall from Korea's independence in 1945, until the construction of a modern building in 2008.
The building has been expanded six times. The main buildings are registered cultural assets of the Republic of Korea, the North Building, which was enlarged in 1962, and the new building, which was enlarged in 1986, demolished in early 2006 to construct a new office building.
From June 2013, in front of the old town hall building hung a large board called Dream Cracker. The sign is meant to convey a message of "comfort, hope and sympathy" to residents passing through Seoul Plaza. Entries entered on the engraving board are limited to purely creative works of less than 20 characters and are selected via public subscription. The first sentence on this board is 'Don't forget, you are someone's hero' which is displayed from June to September 2013. Since March 21, 2017, the latest on the board is 'I saw you first, today'.
In early October 2007, a new 19-storey building was planned to be built on the site of the new building which was originally used as a parking lot. However, the idea of ​​demolition of existing buildings was rejected. The building, which is planned to be used as a cultural and tourist facility for residents, is planned to be built in the form of a three-layer sandwich with a total construction cost of 156.5 billion won. However, because the design "does not represent historical value" in the opinion of the Seoul Metropolitan Government, the building was redesigned.
On February 18, 2008, Yoo Kerl's design from iArc was selected in the Seoul Metropolitan Government design competition. The top of the front of the new building is designed to stand out in a curved shape. Designer Yoo used the three keywords "tradition, citizen, and future" in his design, reflecting the horizontal elements of traditional Korean low-level architecture and reinterpreting the nuances and deep curves of the roof.
The new Seoul City Hall building, just behind the old building in February 2013
On May 20, 2008, due to the limited elevation of Deoksugung, the construction of this new building underwent a change from 22 floors to 13 floors. On August 26, 2008, the government moved Taepyeong Hall to restore the old Taepyeong Hall after the demolition of Taepyeong Hall, and the temporary suspension of Taepyeong Hall was suspended. After that, the Seoul Metropolitan Government and the Cultural Heritage Administration continued to cooperate, and on January 8, 2009, Taepyeong Hall was demolished and the old building closed.
The construction of this new building was originally scheduled to be completed in February 2011 but continues to be delayed. On 27 August 2012, the new City Hall opened to the public and the city government moved its operations to this new building on 1 September. The development project which took four years and five months is also equipped with multipurpose rooms and cultural facilities for residents. The old City Hall building, which is registered as a heritage building, has been converted into a library, and has a collection of over 200,000 books. The new city hall building is built as a futuristic eco-friendly building, and unlike the so-called 'glass palace' in other provinces, it also has a 'curtain wall' and a rotatable outer wall.
#DESTINATION #INTERNATIONAL
Bagikan
Komentar