The Beauty of Tumpak Sewu Waterfall has a Unique Formation -->

The Beauty of Tumpak Sewu Waterfall has a Unique Formation 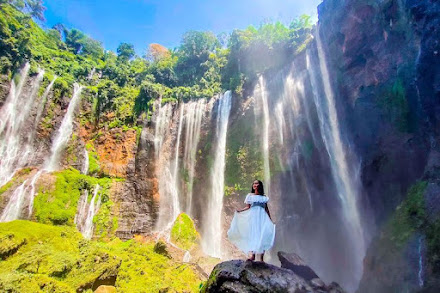 Tumpak Sewu Waterfall or also called Coban Sewu is a waterfall with a height of approximately 120 meters which is located on the border of Lumajang Regency and Malang Regency, East Java Province. Tumpak Sewu Waterfall is the most beautiful waterfall in Java and Indonesia. Tumpak Sewu Waterfall has a unique formation because it has a water flow that widens like a curtain so that it is included in the type of Tiered waterfall.
The location of Tumpak Sewu Waterfall is in a steep, elongated valley with a height of 500 meters above sea level. Tumpak Sewu Waterfall is formed in the flow of the Glidih River which has its head on Mount Semeru.
Tumpak Sewu Waterfall is located between two villages, namely Sidomulyo Village, Pronojiwo District, Lumajang Regency and Sidorenggo Village, Ampel Gading District, Malang Regency, East Java Province, Indonesia.
Friends Traveler can reach this destination from Malang or Lumajang. If you depart from Malang, you can take the Bululawang – Dampit – Tirtomoyo – Pronojiwo route – the border between Lumajang and Malang. Once you arrive at Sidomulyo Village, Pronojiwo District, the entrance to Tumpak Sewu Waterfall will be visible from the side of the road.
After parking the vehicle, then Buddy Traveler must continue the journey on foot. After about ten minutes of moving, you can already see the beauty of Tumpak Sewu from a height. The flow looks circular, its beauty is so similar to Niagara.
If you are still not satisfied, you can go down the hill to see the beauty of the waterfall from below. This trip will take approximately forty minutes on foot. But be careful Friend Traveler, because the path that will be traversed is quite challenging. We recommend wearing shoes with a non-slip bottom.
After descending the hill, Friends Traveler still has to save the river. Take it easy, some security equipment has been provided by the manager.
In addition to enjoying the natural beauty around, the struggle to the bottom of the waterfall is also an interesting experience in itself. But most importantly, do not forget to take into account the weather factor. If the clouds look cloudy, you should not intend to go down. Rain can make traveling more difficult and risky.
After going through the struggle down the hill and crossing the river, visitors can immediately feel the freshness and beauty of Coban Sewu from below. Buddy travelers can see various kinds of water flow, ranging from brown to clear. All combine beautifully to form an extraordinary sight.
In Tumpak Sewu there are 5 tourist attractions. and if sorted from the entrance / counter, the order of the Tumpak Sewu tourist attractions is as follows:
The operating hours of this waterfall are open from 07.00 WIB - 16.00 WIB. but if you want to go down the waterfall, the maximum hour allowed is 15.00 WIB and there are several things to note that not all ages are allowed to go down to the waterfall area. The following is an inscription from the warning/announcement board located in the Tumpak Sewu waterfall area:
#DESTINATION #MOUNTAIN
Bagikan
Komentar