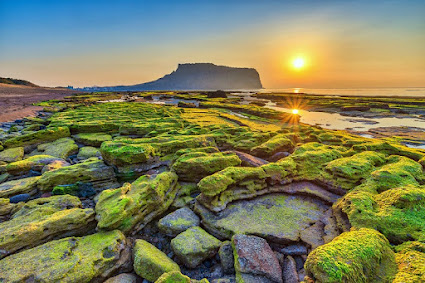 Jeju Island is the largest island in South Korea, located in Jeju Province (Jeju Special Self-Governing Province). The island has an area of ​​1833.2 km2, which is 1.83 percent of the total area of ​​South Korea. In 2020, the resident registration population is around 670,000, the largest of any of the islands in South Korea.
The island is located in the Korean Strait, under the Korean Peninsula, south of South Jeolla Province. Jeju is the only self-governing province in South Korea, meaning it is run by local residents, not mainland politicians.
Jeju Island is oval in shape along 73 km east-west and 31 km north-south, with a gentle slope around Mount Halla in the center. It is 181 kilometers wide and 258 kilometers long. The northern end of Jeju Island is Kimnyeong Beach, the southern end of Mount Songak, the western end of Suwolbong, and the eastern end of Seongsan Ilchulbong. Located in the Yellow Sea and the East China Sea, the Sea of ​​Japan borders South Korea's economy and politics and is also an important military position.
The island was "formed by an underwater volcanic eruption about 2 million years ago." It contains a natural world heritage site, Jeju Volcanic Island and Lava Tubes. Jeju Island belongs to a temperate climate, and has a temperate climate; even in winter, temperatures rarely drop below 0 °C (32 °F). Jeju is a popular vacation destination and a large part of the economy relies on tourism and economic activities from its civilian/naval base.
The beauty of Jeju Island has spread to various parts of the world. Not only popular as a shooting location for Korean Dramas, Jeju Island is also famous for its diversity. Starting from a variety of animals, beautiful natural wealth to a row of unique dishes that are ready to pamper the tongue.
The following are some of the best experiences to do on Jeju Island.
1. Climbing Mount Hallasan
Mount Hallasan is the center of the island with impressive views. This mountain is also included in the UNESCO world heritage site which has a height of 1,950 m. Mount Hallasan has seven beautiful trails with about 6,000 species of flora and fauna. When reaching the top, the climbers will be greeted with a huge crater lake which is amazing.
2. Explore the O'Sulloc tea plantations
O'Sulloc Plantation is famous for the green tea (nockha) you'll ever find. You can even find four high-end teahouses by the name of O'Sulloc. These four teahouses offer an O'Sulloc tea tasting experience on the plantation accompanied by beautiful views of the meandering tea fields.
3. Hunt for food at Jeju Dongmun Market
Jeju Dongmun Market serves a line of restaurants with delicious Jeju cuisine that you can enjoy. From raw fish restaurants to hawker stalls selling satay, abalone rice rolls, and peanut ice cream from Udo.
4. Visit Jeongbang Falls
Another prima donna on Jeju island is Jeongbang Waterfall. This 23-meter-high waterfall is a spectacular sight to behold, especially with the towering old pine trees. Head to the cliff-top observatory which offers no less stunning views of the ocean.
5. Art tour at Bonte Museum
The Bonte Museum is home to an impressive range of traditional and modern artworks. The museum consists of four art galleries with different themes. One of them features Yayoi Kusuma's famous "infinite mirror space", or the work "Pumpkin". Other features include Tadao Ando's meditation room and original design sketches, which contain rare insights into the architect's productive design process and methodology.
How really very interesting to visit is not it? What are you waiting for, immediately make your vacation list and immediately travel to Jeju Island, the largest island in South Korea with beauty that has spread to various parts of the world. Happy Holidays :)
#DESTINATION #INTERNATIONAL
Bagikan
Komentar