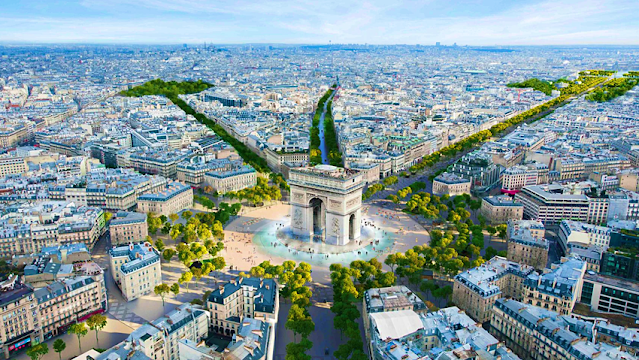 For those of you tourists who want to shop, take a walk, or just take pictures while enjoying the atmosphere of Paris, you can choose this famous tourist destination.
Champs-Élysées is the name of a street in Paris that stretches about 1.9 km from Place de la Concorde to Place Charles de Gaulle, where the famous Arc de Triomphe monument stands. This street is one of the most famous streets in the world, with cinemas, cafes and luxury shops dotting it. The Champs-Élysées is known as 'La plus belle avenue du monde' or 'the most beautiful street in the world'.
The origins of the Champs-Élysées can be traced back to 1640 when space was opened to plant rows of trees, which would later become roads. Its name translates to "Elysian Square" from Greek mythology, meaning the resting place of Greek gods and dead heroes, similar to Christian paradise.
In 1724, the street was expanded and acquired its current size and in 1994 the city renovated the sidewalks, significantly improving the Champs-Élysées. Today, the building is a high-end shop, cafe and office, ideal for shopping or strolling one of the city's most beautiful streets.
The streets here are very busy and crowded with visitors from young people and tourists from various countries. While traveling, tourists can see ancient buildings or structures, some monuments, and amazing statues.
The path is divided in two. The lower section, which is closest to the Place de la Concorde, runs through a garden with magnificent buildings such as the Palais de la Découverte (Palace of Discoveries), the Petit Palais, and the Grand Palais.
The higher part of the Champs-Élysées begins at the place of Charles de Gaulle, where the magnificent Arc de Triomphe is located, with its many high-end shops, restaurants, cinemas, and large department stores.
Champs-Élysées berakhir di seberang Arc de Triomphe, di mana avenue de la Grande Armée mengarah ke Grande Arche de la Défense in the La Défense district.
Visitors can enjoy a variety of cafes and can shop from well-known brand shops. Shophouses along this road have very expensive rental prices. It can also be seen from the names of the shops there, including Anne Fontaine, Cerruti, Cecilia Gilli, Zara, Banana Republik, Agatha, Bulgari, Cartier, and BCBG Max Azria. Sports equipment is also available such as the Nike Store, Adidas Performance Store, and Quicksilver.
In addition there are also Disney Store, Berenice, Carel, Cesare Paciotti, Guess, Christian Louboutin. Paris' famous bag brand Louis Vuitton is also a must-visit destination here. In Paris there are 4 Louis Vuitton shops, but the center is on the Champs-Élysées.
We can also watch the cabaret on the Lido de Paris which is still on this street, or visit the Artcurial auction house and see the auction line which is held more than 100 times a year.
After doing many activities, we can relax enjoying hot coffee. Many cafes line up here, such as Harriott and George V. From the Champs-Élysées, we can also observe the splendor of Paris' iconic monument, the Arc de Triomphe with its architecture that looks like a large gate. When visiting there, you should take care of your luggage so that unwanted things do not happen because there are no crowds.
How really very interesting to visit is not it? Let's immediately make your vacation list and immediately  travel to the Champs-Élysées.
#DESTINATION
Bagikan
Komentar