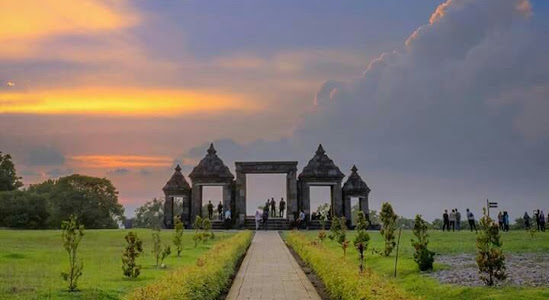 If you visit Prambanan, another destination that is a pity to miss is Ratu Boko Palace. For information, Ratu Boko Palace is the grandest kingdom of its time which was built since the 8th century. The location is absolutely stunning. Traveler friends can even witness the splendor of Prambanan Temple here. One more thing that is very dear to miss, namely watching the sunset or sunrise which is so alluring. For its location, not far from Prambanan Temple.
The palace is located at 196 meters above sea level. This 250,000 m2 palace is divided into four namely central, west, southeast, and east. The middle part consists of the main gate building, the field, the Burning Temple, the pond, the stone pedestal, and the Paseban. While the southeastern part includes the Pendopo, Balai, 3 temples, a pond, and the Keputren complex. A complex of caves, Buddhist stupas and ponds is located to the east. While the western part only consists of hills.
When you enter from the palace gates, you will go straight to the center. Two tall gates will welcome you. The first gate has 3 doors while the second gate has 5 doors. If you are careful, at the first gate you will find the words 'Panabwara'. The word, based on the Wanua Tengah III inscription, was written by Rakai Panabwara, (a descendant of Rakai Panangkaran) who took over the palace. The purpose of writing his name is to legitimize power, give 'power' to make it bigger and give a sign that the building is the main building.
About 45 meters from the second gate, you will find a temple building made of white stone so it is called Candi Batu Putih. Not far from there, you will also find the Temple of Burning. This temple is square (26 meters x 26 meters) and has 2 terraces. As the name implies, this temple is used for cremation. In addition to the two temples, a pedestal stone and a pond will be found later if you walk about 10 meters from the Burning Temple.
The mysterious well will be found if you walk southeast of the Burning Temple. It is said that the well is named Amerta Mantana which means holy water that is given a spell. Today, the water is still frequently used. Local people say, well water can bring good luck to the wearer. While Hindus use it for the Tawur Agung Ceremony the day before Nyepi. The use of water in ceremonies is believed to support its purpose, namely to purify oneself and restore the earth and its contents to its original harmony. We recommend that you visit Prambanan Temple the day before Nyepi if you want to see the ceremony process.
Stepping into the eastern part of the palace, you will find two caves, a large pool measuring 20 meters x 50 meters and a Buddhist stupa that looks calm. Both caves are formed from sedimentary rock called Pumis Breccia. The cave above is called Gua Lanang, while the cave below is called Gua Wadon. Right in front of Lanang Cave there is a pond and three stupas. Based on a study, it is known that the stupa is Aksobya, one of the Buddhist Pantheons.
Although built by Buddhists, this palace has Hindu elements. This can be seen by the presence of Linga and Yoni, statues of Ganesha, and gold plates that read "Om Rudra ya namah swaha" as a form of worship of Lord Rudra which is another name for Lord Shiva. The existence of Hindu elements proves religious tolerance which is reflected in architectural works. Indeed, at that time Rakai Panangkaran, a Buddhist, lived side by side with Hindus.
Few know that this palace is a silent witness to the beginning of glory in Sumatra. Balaputradewa had fled to this palace before going to Sumatra when he was attacked by Rakai Pikatan. Balaputradewa rebelled because he felt he was the number two person in the government of the Ancient Mataram Kingdom due to Rakai Pikatan's marriage to Pramudhawardani (Balaputradewa's brother. After losing and fleeing to Sumatra, then he became king of the Srivijaya Kingdom.
As a cultural heritage building, Ratu Boko Palace is unique compared to other relics. If other buildings are generally in the form of temples or places of worship, then as the name implies, this palace shows the characteristics of being a place to live. This is indicated by the existence of buildings in the form of pillars and roofs made of wood, although now all that is left is only stones of stone. Explore this palace, then you will get more, one of which is a very beautiful sunset view. A tourist from the United States said, "This is the most beautiful sunset on earth."
The central government has now handed over the Ratu Boko Site complex to special authorities, along with the management of the Borobudur and Prambanan temples in state-owned enterprises, after the last two temples were added to the UNESCO World Heritage List. As a result, Ratu Boko Site has been reorganized in several places to be used as a place for educational and cultural activities.
There is an additional building in front of the gate, namely a restaurant and an open space (Plaza Andrawina) which can be used for meetings with a capacity of about 500 people, with views to the north (Prambanan District and Mount Merapi). In addition, the manager provides camping and trekking sites, archaeological education packages, and tour guides.
#DESTINATION #NATIONAL
Bagikan
Komentar