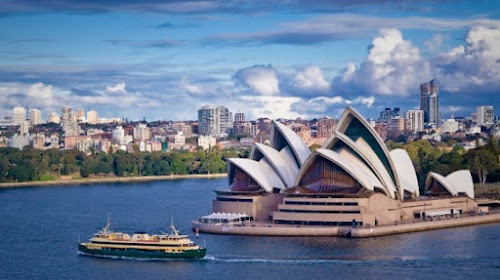 If you haven't been to the Opera House, you haven't been to Sydney! This landmark has become an icon for the city of Sydney. This place is actually the location of various activities. Ranging from opera, music concerts, theater, to other art exhibitions. However, as an icon of the city, the Sydney Opera House is also a magnet for people to visit this landmark.
People, especially tourists, make the Sydney Opera House their place to take pictures. This building by Danish architect Jon Utzon is located in Sydney Harbour, adjacent to the Royal Botanic Gardens and Sydney's business district.
Here you can take selfies and take pictures with the background of the Sydney Opera House. You can also enter the building. If you are interested, you can also watch the show that was held there. Of course you have to buy tickets in advance. You can also buy various souvenirs such as t-shirts and keychain trinkets, fridge magnets and others. For the hungry, there are also restaurants around the building.
The most famous characteristic of the building is its roof which is unique and different from other famous buildings in the world. Remarkably, the building that serves as the venue for various performances has been named a UNESCO World Heritage Site in 2007.
The uniqueness of the Sydney Opera House is inseparable from the unique facts that accompany it. Want to know what these unique facts are? Let's look at the following facts.
1. There was a competition to design the Sydney Opera House in 1956
The current form of the Sydney Opera House was designed by the winner of the International Opera House Design Competition in 1956. Jorn Utzon, a Danish architect, was crowned the winner of the competition. He was also given a cash prize of £5,000.
Of course he didn't win the competition easily. Initially, his work was rejected by all three judges at the competition. However, the fourth jury voted for his work so he came out victorious. In 1959, the Sydney Opera House began to be built based on his design.
2. Overall, the Sydney Opera House has 1,000 rooms
Apparently, the Sydney Opera House has many rooms in it. Unmitigated, the total reaches 1,000 rooms! Each room has a different function.
However, there are only seven rooms that function as performance halls. The largest performance hall was named the Concert Hall with a capacity of 2,679 seats, while the smallest room was named the Utzon Room with a capacity of 210 seats.
3. The roof design of the Sydney Opera House resembles an orange peel
If you're curious about the resemblance of the roof of the Sydney Opera House to an object, the answer is orange peel. The shape of the roof is made like a torn orange peel so it is considered like a shell. The number of roofs with shell shapes is 14 pieces.
When all the roofs are combined, they form a ball. The roof is covered with over a million tiles made in Sweden. Another fact, the highest part of the roof of this building is 67 meters above sea level, the same as a 22-story building, you know!
4. The Sydney Opera House was opened to the public by Queen Elizabeth II in 1973
Worked since 1959, the Sydney Opera House was completed 14 years later, in 1973. The building was inaugurated by Queen Elizabeth II on 20 October 1973.
At the same time, Jorn Utzon was awarded a gold medal by the Royal Institute of Architects Australia. Unfortunately, he was not present at the inauguration ceremony.
5. Served as vehicle for the triathlon at the 2000 Olympics in Sydney
The Sydney Opera House was the venue for the 2000 Olympics in Sydney. This vehicle is used for triathlon sports.
Reported by the World Olympics website, the winner of the men's sports category is Simon Whitfield from Canada. In contrast, the winner of the women's category was Brigitte McMahon from Switzerland.
6. Arnold Schwarzenegger won the last bodybuilding competition at the Sydney Opera House
You must know Arnold Schwarzenegger, one of the older actors from the United States. He once won the Mr. His last Olympia was held at the Sydney Opera House in 1980.
However, his victory at that time caused controversy. The reason, he initially did not intend to compete in the competition. Then, he decided to fight at the last minute before the match started so that several other contestants objected, as reported by the Body Building page.
Not only the uniqueness and various facts, it turns out that behind the splendor of the Sydney Opera House building, it uses an environmentally friendly cooling system. The system is a seawater based cooling system. Seawater is channeled into the building using a 35-kilometer pipe.
The cooling system can also regulate the temperature of the building, either being warmer or cooler. When there is a Sydney Symphony Orchestra performance, the building temperature must be set at 22.5 degrees Celsius to keep the sound of the instruments playing in sync.
#DESTINATION #INTERNATIONAL
Bagikan
Komentar