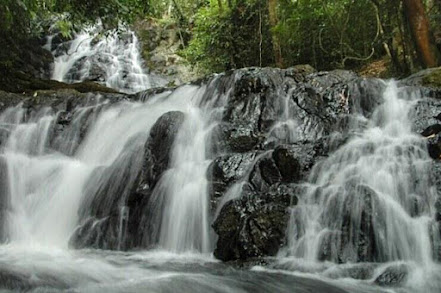 The hilly area along the Lematang river, hides many beautiful paradises in the thick forest and wild nature. In the village of Ulak Dubuk, Talang Padang District, Empat Lawang Regency, there is a Batu Betiang waterfall tour. This waterfall is very beautiful, the shape of which is stepped by the erosion of water, and the rocks are rocky and steep, dimming the emotions of the visitors because of the beauty of God's creation.
The rushing water and its gurgling sound hit the rocks below, adding to the mystical atmosphere in the dark, densely covered trees. However, the atmosphere immediately changed as the water soaked the whole body, which felt very fresh and clean.
The location of the Batu Betiang waterfall in Ulak Dabuk village, Talang Padang district is about 20 kilometers from the town of Tebing Tinggi, or about 30 minutes by motorbike. Not only relying on the beauty of the waterfall, but the beautiful panorama behind Bukit Batu Harum also adds a special impression. It does require an adventurous spirit when visiting Batu Betiang Waterfall. To get to the location requires courage and preparation. Because, visitors have to go through steep roads, through valleys, and the eyes are pampered by the beautiful lined hills. Most who come to the waterfall, are nature lovers.
But that's all just a few obstacles to enjoy a truly perfect nature. The water is clear and quite swift, a sloping waterfall that you can climb is the main dish when you are at Batu Betiang Waterfall.
To go to the waterfall, it should be done in groups considering the steep terrain and difficult road access. Moreover, if it rains, the roads will become slippery and you need to be careful.
The Batu Betiang waterfall area from intensenews monitoring is still very beautiful. There has even been no construction of facilities from the government. Although the place is very beautiful, only those who have an adventurous spirit come to the waterfall area.
Besides having a beautiful natural charm, Batu Betiang Waterfall also keeps the legend of folklore in the area.
It is said that according to the stories of the ancient people in the area, Batu Betiang which is located on the left and right of the waterfall, there is a legend of "The Bitter Tongue" which according to the story of the bitter tongue wants to make a rice barn, by making a waterwheel that uses a waterfall.
According to the stories of previous people if the stone contained in the water has not yet become stone. Instead, it is still wood neatly arranged by the bitter tongue to build a rice barn.
However, the story of the previous person's plan was not approved by the local community. So the plan was not to continue. In fact, the local people lie to the bitter tongue if their child dies in the village. The goal is to make the bitter tongue go home and stop making rice granaries.
Unfortunately, the information was not paid much attention by the bitter tongue and continued to arrange the wood at the edge of the waterfall ''Batu Betiang'' . Not running out of ideas, the local community again conveyed to the bitter tongue, if his child died.
Having received this information, the bitter tongue immediately died at the location of the ''stone pillar'' waterfall. However, before leaving the location, the bitter tongue said that the wood that had been neatly arranged at the edge of the waterfall would turn to stone. By local residents, the waterfall is named Batu Betiang Waterfall.
#DESTINATION #NATIONAL
Bagikan
Komentar