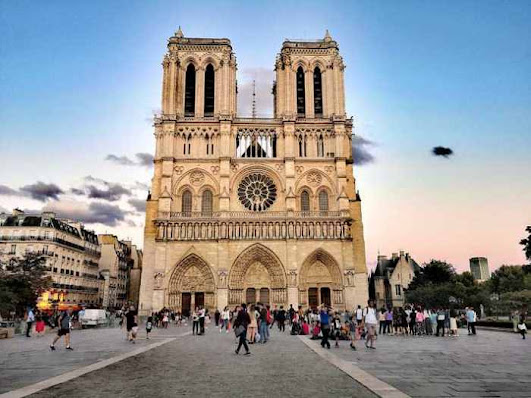 Although known as the city of fashion, Paris also has many historical buildings with classic architecture that should not be missed. Here you will find rows of old churches or cathedrals with stunning designs. One of them is the famous Notre Dame Cathedral.
Besides the Eiffel Tower, this place is arguably one of the icons of Paris tourism. Located on the Seine, a small island in France, Notre Dame Cathedral is the largest church in France with gothic-style architecture full of historical value. Meaning "Our Mother in Paris", this church which is often a religious tourism destination in France has a charming classic interior design to enjoy. From this church, Toppers can see a beautiful panorama of the city of the Seine.
This church was built on the ruins of two churches. Before the two churches, it was the Roman temple of Gallo dedicated to Jupiter. Notre Dame Cathedral was initiated by Maurice de Sully, the bishop of Paris who wanted to build one building from two fallen basilicas or churches.
Pope Alexander III in 1163 laid the groundwork for the foundation of Notre Dame. Furthermore, the church altar was completed in 1189. The building for the choir and the western facade was completed in 1250. While the terrace, chapel and others were built 100 years later.
Two large Gothic towers in front of the church or on the west facade were built from 1210 to 1250. The 68-meter-high tower has doors decorated with Gothic carvings. While the roof is decorated with rows of figures of kings of the Old Testament Bible.
Quoted from the New York Times, during the French Revolution, the Notre Dame building was damaged and abandoned in the 1790s. Victor Hugo's 1831 novel, "Notre-Dame de Paris," tells the reader about the condition of the old building.
The novel prompted major renovations from 1844 to 1864 by architects Jean Baptiste Antoine Lassus and Eugene Emmanuel Viollet le-Duc. The two architects smoothed the spire and the pillars of the building.
The church was also renovated after World War II because German soldiers destroyed the stained glass of Notre Dame. The stained glass or "Rose Window" is one of the largest in the world and was made in the 13th century.
Notre Dame Cathedral is still used today by the Roman Catholic Church for Sunday Mass. A well-known historical artifact and very popular today is the famous bell which has been redesigned to ring automatically. Every visitor to the bell tower must be prepared to climb the stairs as high as 140 steps, if you want to see the historic bells or see the city of Paris.
Although its main function is a church or house of worship, Notre Dame Cathedral is now open to the public as a tourist attraction. Anyone can enter and there is no entry fee or ticket. The exception is if you want to go up to the top of the building. It is mandatory to pay around 8.50 euros.
Once inside, Friend Traveler is prohibited from making a fuss. Just enjoy the beauty of ancient architecture that is presented in front of your eyes. If you wish, you can make a generous donation in the box provided.
One thing that should not be missed here is buying souvenir coins with beautiful carvings. Traveler's friends can get it from a special reward machine for 1 euro per coin.
Notre Dame Cathedral is located right beside the La Seine River. After being satisfied with seeing every corner of the church, Friends Traveler can sit and enjoy the view of the river. This is usually done by French citizens in the summer.
Another unique thing about Notre Dame Cathedral is that Friends Traveler can find a kind of manhole cover in front of the entrance that functions as Point Zero. According to the story circulating, anyone who ever set foot here, will definitely return to Paris one day.
#DESTINATION #NATIONAL
Bagikan
Komentar