Enjoy the hype of Braga and Taste the Culinary Delicacy -->

Enjoy the hype of Braga and Taste the Culinary Delicacy 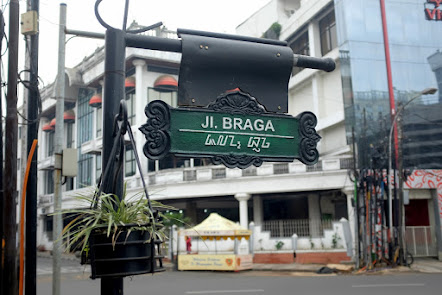 The city of Bandung is the largest metropolitan city in West Java Province, as well as being the capital of the province. The city is located 140 km southeast of Jakarta, and is the largest city in the western part of Java Island.
In the past, Jalan Braga was just a small street located near a quiet settlement. In the 1900s, local residents called it Jalan Culik or Jalan Pedati because it was quite vulnerable. After several decades later, the streets began to be crowded with Dutch businessmen who set up their businesses. They started to set up bars, shops, and several other places of entertainment.
Then in the 1920-1930s, several shops and clothing boutiques began to exist. They took clothing models from the city of Paris, France, which at that time, France was the world's fashion center. Because a variety of famous clothes are displayed along the road, from there Jalan Culik is better known as Paris Van Java. After the Dutch colonial era ended, Paris Van Java continued to grow. Until finally, the name Paris Van Java was changed to Jalan Braga to make it easier for local residents to catch it.
A trip to Bandung, it feels incomplete if you don't visit Jalan Braga. Jalan Braga is one of the main roads in the city of Bandung, West Java. What is the charm of this street so many tourists are willing to come all the way?
In this location, you can observe buildings with very beautiful European architecture. Located in a city with the nickname Paris Van Java, Jalan Braga can be said as one of the major shopping and entertainment centers. Because the buildings around it are interesting, this street is a tourist attraction that presents a thousand beauties. Not only fun for photos, you can also enjoy culinary tours here.
Several seats are available on Jalan Braga. This condition is very useful when you want to enjoy this urban street. Afternoon is the best time to visit Jalan Braga. The twilight sky is so impressive that it adds to the shady and pleasant atmosphere.
As the night progresses, this area gets busier. There are so many communities of young people who 'hang out' in several coffee shops.
On Jalan Braga, there are also interesting tourist destinations for tourists. Although not many, but this place is often a target to get to know history and take pictures. Here are tourist attractions that are worth exploring when walking through Jalan Braga:
1. Museum of Asia Africa
Formerly the Asia-Africa Museum was named "Freedom Building". This building is a witness to history and is very famous because it was the place where the Asian-African Conference was held in 1965. Now the building is used to store a collection of photos, dioramas, and various other relics of the Asian-African Conference. This museum is located at Jalan Asia Afrika No. 65, Braga, Bandung City, West Java.
2. Braga City Walk
Braga City Walk is located at Jalan Braga No. 99 – 101, Bandung. This place is a shopping and entertainment center. Similar to Malioboro in Jogja, Braga City Walk is often crowded with tourists, both day and night. if you come at night, the conditions are very fun to take a leisurely stroll while watching some ancient buildings from the Dutch East Indies era.
3. Bank Indonesia Bandung
Previously, the Bank Indonesia Building functioned as a Regional VI Bank Indonesia Representative Office Building (West Java and Banten). Then in 2014, Bank Indonesia made the building a cultural heritage. Until now, the Bank Indonesia Building is one of the most popular tourist destinations visited by tourists.
4. Without Without Art Shop
Sin Sin Art Shop is a gift shop that is very popular with tourists. Here are available a variety of souvenirs with good quality. Sin Sin Art Shop is located at Jalan Braga No. 59, Braga, Bandung City.
It's not complete when you visit the Jalan Braga area, Bandung but haven't tasted the culinary delights. There are so many interesting culinary delights with a tantalizing taste here.
1. Braga Art Cafe
Braga Art Cafe serves coffee as a mainstay menu. The coffee offered is very diverse because it is taken from various regions in Indonesia. The dishes are made manually, but there is also coffee made in the western style. Other menus that can be enjoyed are Sundanese-style fried rice, chicken parmigiana, and others.
2. Bacang Panas Braga
This place only sells one menu, namely Bacang Panas Braga. This food is processed using the main ingredient of boiled rice and mixed with sliced ​​beef. As a complement, you can add fat and chili sauce. The price is quite cheap, only Rp. 8,000.
3. Warung Five Flavors
Warung Lima Rasa provides a variety of Indonesian specialties. One of his favorite menus is raw chili geprek chicken. Other menus that are often hunted by tourists are honey grilled chicken, creamy fried chicken, galangal fried chicken, and various other preparations. Drinks to choose from, such as iced tea, milkshakes, vanilla, and many more.
4. Braga Permai Resto And Cafe
This is one of the classy restaurants that occupies Jalan Braga. The variety of food offered is very diverse, such as oxtail soup, lontong Cap Go Meh, oxtail soup, huzarensla, bitter ballen, boulangers, and others. Barga Permai Resto and Cafe is also suitable to be chosen as a honeymoon destination.
Visiting Jalan Braga can be reached by using public transportation or private vehicles. Jalan Braga is a very famous area throughout Bandung. Moreover, Bandung can be said to be a friendly area with road directions.
When using public transportation, take several buses and angkot that go directly to Jalan Braga. No need to worry, Bandung is also known as one of the friendly cities for public transportation. Using public transportation is the best option.
#DESTINATION #NATIONAL
Bagikan
Komentar