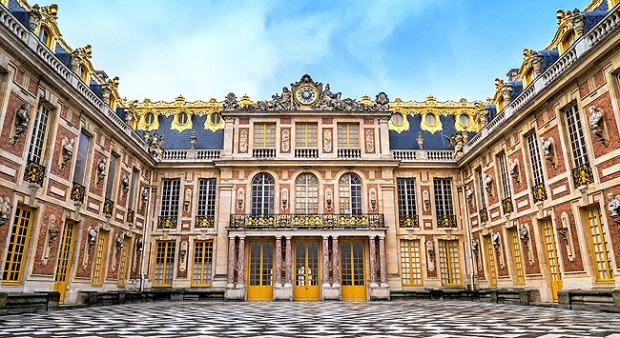 If you are an admirer of history, this place can be included in the list of mandatory destinations when visiting France. the beauty and splendor of the building, the paintings in it and the beauty of the garden are very pleasing to the eye, as well as instagramable.
The Palace of Versailles is one of the most spectacular places in the world. This palace was once a symbol of the power and beauty of the French monarchy as it was a remarkable achievement in terms of architecture, design, engineering and luxury.
One of the highlights is the Hall of Mirrors. This room is equipped with a mirror and a ceiling in the form of paintings, with beautiful crystal chandeliers and gold-plated ornaments.
With a track record of royal history, there are many relics of the monarchy that Toppers can visit while on vacation to France, one of which is the Palace of Versailles. Located in a suburb of Paris and away from the hustle and bustle of the city, this historic French tourist attraction will pamper you with architectural splendor and a stunning royal atmosphere.
Once the seat of the French government, the Palace of Versailles is now a museum to commemorate the history and splendor of French history. In addition to the splendor of the palace, when visiting this tourist spot in France Toppers will be guided and told the long history of the French empire as well as interesting facts about the palace of Versailles.
The palace contains 700 rooms, 2,000 windows, 1,250 chimneys and 67 stairs. The palace can accommodate as many as 20,000 people in its courtyard alone. No wonder the palace is visited by more than ten million people every year.
But behind all this beauty lies a story about the politics, costs, and arrogance of this palace. After all, this palace once played host to some of the most important moments in European history.
From its surprising origins to some of the modern developments that have taken place, here's the fascinating history of the Palace of Versailles.
1. The Palace of Versailles has a very simple beginning
Today, the palace became a symbol of luxury and wealth. But like all other great buildings, the Palace of Versailles has a humble beginning story. In the past, the area around Versailles was used as a hunting ground by French kings long before the site was built. In fact, King Henry IV once hunted there with his son, King Louis XIII and they stayed at a local inn.
After ascending the throne in 1610, Louis XIII had a hunting lodge built there in 1623. In fact, one of the king's courtiers, François de Bassompierre, described the lodge as a very simple place for a king.
In 1631, Louis decided to rebuild, expanding the structure into a much more elegant two-story chateau, and having a garden around it.
Interestingly, the chateau's exterior walls are still part of the modern palace - the famous Marble Court there, framed by the chateau's exterior walls, makes it clear how small and ordinary this structure is when compared to what was eventually built on the site.
2. Built during the reign of Louis XIV
Louis XIII's son and successor, Louis XIV, initially lived at the Louvre in Paris like the previous kings. According to Live Science, Louis XIV decided to move the government out of the city for his own safety and to force the nobles of his court to come to him in more remote areas, so that he could have control over them.
He clearly didn't like the simple two-story country house his father had built, so he spent 5 decades expanding the chateau that used to be his father's hunting ground. After the construction was completed, the French aristocrats often attended many of the ceremonial events at Versailles.
3. Built at a spectacular cost
According to David Grubin's documentary via pbs.org, some historians estimate the total cost to build the Palace of Versailles at around 300 billion US dollars. And it's not of little value. Just compare it with Buckingham Palace which is considered the most expensive house in the world and its value is between 2-5 billion US dollars.
Then there's the famous David Siegel mega-mansion in Florida that mimics Versailles. Built since 2004, the mansion only cost 30 million US dollars. That is why Grubin estimates that the construction of the Palace of Versailles is considered a disadvantage for the French government because it annexes about 25 percent of its total annual income.
4. It took decades just to build the garden taman
One of the reasons why the Palace of Versailles is so spectacular has to do with the gardens that surround it. The creation of the park employed architect Andre le Norte for 40 years to design and build it.
Since the land was a wet swamp, the entire area had to be drained and leveled. Then, trees and plants also had to be cultivated and transported from various parts of France.
Eleven fountains were also designed and made by sculptors and craftsmen. That length of time also does not include designing and building the Grand Canal, two parterres, several large pools, and nearly 20 other elements of water.
Requires consistent maintenance and every century, the gardens require replanting to keep everything in the best condition.
#DESTINATION #INTERNATIONAL
Bagikan
Komentar