Salar de Uyuni With Most Extreme and Amazing View in Bolivia -->

Salar de Uyuni With Most Extreme and Amazing View in Bolivia 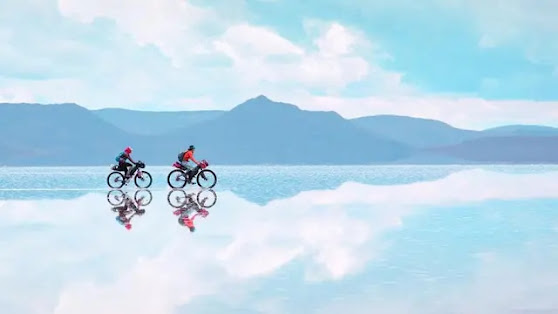 Salar de Uyuni (source: curiousity)
The world is full of wonders. One thing that is interesting is, a miracle that is created by itself through a long process without any human intervention at all.
South America is one of them. Destinations in South America present many unique natural contours that you can visit at least once in your lifetime. One of them is the largest salt flat in the world, Salar de Uyuni in Bolivia.
Salar de Uyuni in Bolivia is considered one of the most extreme and extraordinary sights in all of South America, if not on Earth. This is the Salar de Uyuni, the largest salt flat in the world covering an area of ​​10,582 kilometers as well as the largest natural mirror in the world. Located between Potosi and Oruro, near the summit of the Andes Mountains, Bolivia's salt flats were formed by several prehistoric lakes, which changed shape some 30,000 to 42,000 years ago. Its surface is covered with a layer of salt several feet high, keeping the plains dry all year round.
Several years ago there was an ancient lake called Minchin. This ancient lake is thought to have covered most of southwestern Bolivia. Minchin's ancient lake then gradually dried up. Over the years, the ancient lake became two lakes, namely Lake Poopo and Lake Uru Uru which still exist today.
While the remnants of a drying ancient lake have been turned into giant salt fields. The salt content comes from minerals in the mountains that were dissolved by rain in the past and mixed with lake water.
The dryness of this ancient lake is caused by the evaporation process over the years. Because there is no river flow, the salt that does not evaporate eventually fills the bottom of the dry lake which is now known as Salar de Uyuni.
At the Salar de Uyuni, a thick layer of salt extends to the horizon, and is covered by a layered polygonal pattern that emerges from the ground. According to Gizmodo, several times a year the plain, located in southwest Bolivia, receives rainfall until it is covered by a thin layer of water. That's when Salar de Uyuni transformed into the largest natural mirror on earth. Its perfectly flat and clear surface reflects the reflection of the sky and clouds above it, resulting in an astonishing sight for anyone who sees it.
Although it looks very hot, the temperature in Salar de Uyuni is actually quite warm, only ranging from 13 degrees to 21 degrees Celsius. Every year tourists flock to Salar de Uyuni to witness the phenomenon of the giant mirror. In addition to reflecting there, visitors to Salar de Uyuni also had the opportunity to see flocks of pink flamingos, which indeed make this salt flat area their habitat.
The right time to visit the Salar de Uyuni tourist village is during the rainy or summer season. Not only in the morning and afternoon, Salar de Uyuni offers a charming view of the sunset.
Here are tips to get to the location of the will in Bolivia:
1. The Uyuni Trail in Bolivia
To go to Salar de Uyuni, travelers can book entrance tickets through travel agents online. Another way is to choose the available tour packages by directly coming to several travel agency offices in La Paz or Uyuni City. With the distance from La Paz to Uyuni takes about 7 hours drive.
2. The San Pedro de Atacama Line, Chile
For this route, the traveler will take longer. Usually the journey takes three days before finally arriving at the Salar de Uyuni.
Travelers who come from Chile by land will be escorted by a travel agent to the Bolivian border. Then the traveler will be transferred to a tour agency in Bolivia.
3. The Tupiza Trail, Bolivia
It takes four days if you use the Tupiza route to get to this tourist location which annually harvests 25,000 tons of salt. Usually this route is used by tourists who come from Argentina.
#DESTINATION #NATIONAL
Bagikan
Komentar