Enjoy the Enchantment of the Second Largest Lake in Sumatra -->

Enjoy the Enchantment of the Second Largest Lake in Sumatra 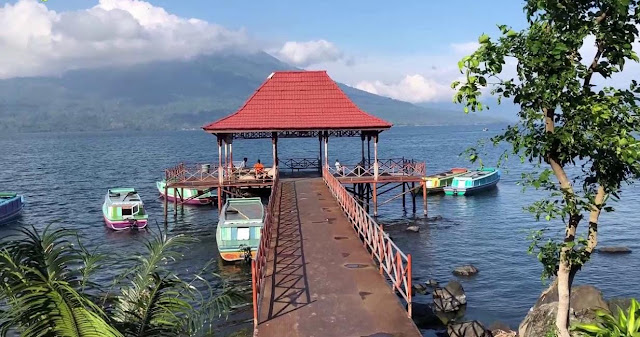 Lake Ranau is the second largest lake in Sumatra. Lake Ranau has an area of ​​128 square kilometers or 8 × 16 kilometers has an interesting legend.
This lake is located on the border of West Lampung Regency, Lampung Province and South Ogan Komering Ulu Regency, South Sumatra Province.
Geographically, the topography of Lake Ranau is hilly, this practically makes Lake Ranau have a cool weather. The lake is famous for frequent fishermen to look for fish such as mujair, kepor, kepiat, and harongan.
At the foot of Mount Semiung there is natural hot water that comes from the bottom of the lake. A waterfall, namely Subik, can also be seen around the lake. Lake Ranau is located on the border of West Lampung, Lampung Province.
In the middle of the lake there is an island which the locals call Marisa Island. This island is a fairly large area of ​​rice fields, coconut trees and forests that are home to several types of primates.
Besides being popular with the natural beauty it offers, Lake Ranau is also famous for the fish in the lake which is quite large, ranging from tilapia fish, harongan fish, kepiat fish and kepor fish.
Lake Ranau also has very good places to visit such as rainbow beach, angel beach, court appeal agung, Ranau rafting, Tama flowers, hot springs and Waterboom.
All of these tourist attractions can be visited because they are not far apart. Every weekend and national holiday, this tourist attraction on Lake Ranau is crowded with tourists, especially during year-end holidays like this.
Around Lake Ranau, there are many beautiful places to explore, such as Bukit Barisan National Park, Subik Tuha Waterfall, and Pelangi Beach. If you want to stay overnight, there are several inns around this destination.
Tourist facilities at Lake Ranau are also fairly complete. There are jetski facilities, restaurants, toilets, prayer rooms, lodging, and other supporting facilities. If you visit at the end or the beginning of the year, you can see various kinds of traditional events organized by the Ranau Tribe community such as Aban Gemiser and the Lake Ranau Festival which is filled with various performances of Ranau's special arts and crafts.
According to the story that has developed so far, once upon a time long ago in a fertile village on the edge of a large swamp (swamp) there lived a traditional elder. The ponds are overgrown with Reranau trees. In addition, a very large Hara tree grew. In this tree a lot of birds nesting and among them there is a pair of very large birds and becomes the leader of them.
The livelihoods of the villagers are fishing and farming by farming and cultivating rice fields. Because of the fertility of this area, many people come and settle and make a living by farming. For that, they open new lands that are still fertile, but the longer the population cultivates to the tops of hills and mountains, even to the forbidden forest.
They are always on the move looking for new land that is still fertile. Prohibitions and customary rules in farming are no longer heeded by the residents, they no longer want to listen to the advice given by customary leaders. With the development of time, the population is increasing and the busyness of parents to take care of their children is increasing.
As a result, children are not cared for so that they are not only playing but have started to destroy. They began to disturb the birds and took their nests around the marshes and those living in the trees. These children catch birds and take their nests for play. Seeing this state, the two big birds became very angry. They start attacking passers-by as well as those near the nest. It seems that the two big birds are protesting the disturbance to his life.
Residents began to try to drive the bird away by cutting down the Hara tree but to no avail, in fact the two birds became increasingly vicious. Several people agreed to report this news to the traditional elders they had forgotten about and asked for his help in expelling the two birds. After talking and getting advice, they finally went home. Meanwhile, the traditional elders asked for guidance and strength to destroy the two birds that had caused havoc for the villagers.
After some time the male population was gathered and on the appointed day led by traditional elders, the people flocked to the edge of the paya-paya. Not long after, the two birds came to attack, but the traditional elders were ready to face it by exerting all their strength and magic. Finally, the traditional elders were able to drive the two ferocious birds away.
Then on the instructions of traditional elders, the residents finally tried to cut down the Hara tree and the Reranau tree. But the two trees seemed to have the strength so that they could not be cut down. After the traditional elders stuck their axes, then the people in crowds could cut them down, the Hara tree finally fell.
From the Hara tree that was cut down came springs of water, more and more and more eventually flooded the ponds.
Now a large and beautiful lake is formed, which is called Lake Ranau. To honor the services of traditional elders, the residents gave him the title "Singa Juru" which means a brave and wise leader.
#DESTINATION #LAKE
Bagikan
Komentar