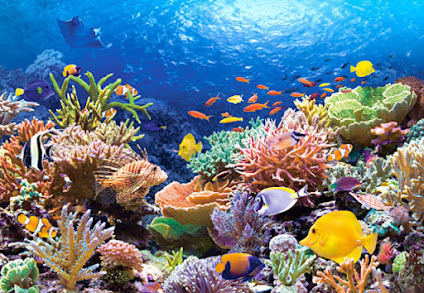 Sulawesi is one of the largest islands in Indonesia that offers a variety of tourist attractions, from mountain peaks to the depths of the sea. To the north of the island of Sulawesi, there is a global marine tourism destination, namely the Bunaken Marine National Park. The underwater scenery makes us hypnotized. This attractive underwater paradise is a must-visit to fill your vacation time.
This park is located in the Coral Triangle. Various colors of biotan and beautiful coral reefs will be an unforgettable sight while under the surface of the water.
Bunaken National Park has a very rich coral reef ecosystem and more than 390 species of coral reefs in the world are in this park.
There are many types of marine plants or algae found in this area, ranging from Caulerpa, Padina, and Halimeda, while the types of seaweed that can be found in this park are Thalassaodendron ciliatum, Thalassia hemprichii, Enhallus acoroides.
In addition to marine plants and coral reefs, Bunaken National Park also has various other species, such as marine mammals, fish, endemic turtles, reptiles, birds, molluscs, and mangrove trees. For the type of fish itself, in this Park at least more than 90 species of fish live in this area.
Bunaken National Park can be regarded as a representative of all marine ecosystems in Indonesia, including seagrass beds, coral reefs, several species of advertisement, and coastal ecosystems.
The biodiversity in Bunaken Park is very good and quite enchanting, and almost 70 percent of the species in the world, be it fish species, coral reefs, and so on, are in this National Park.
This national park stretches for 75,000 hectares in marine waters. There are at least five islands that are part of this park, namely Siladen, Montehage, Nain, and Bunaken.
In Bunaken Marine National Park, there is one type of rare turtle, namely the hawksbill turtle. Hawksbill turtle (Hawksbill) is one of the rare turtle species, and has been designated as the most famous inhabitant of Bunaken National Park.
In addition to hawksbill turtles, Bunaken Marine Park also has other marine creatures such as tree damselfish, clownfish, angelfish, and many other species that live in this National Park in Bunaken.
Maybe not many people know why one of the dive sites is called a shipwreck. It turns out that the name is indeed a shipwreck here. In the past, it was said that there was a ship belonging to a German merchant that had previously sunk. This ship later became home to tens of thousands of fish here.
How to get to Bunaken Marine National Park
When you arrive at Sam Ratulangi airport, immediately go to the center of Manado City by taking a taxi. From there, use a motorbike or car to go to Manado Harbor. The means of transportation from the port to tourist sites is by using a ferry or cruise.
The estimated travel time from Manado City to Manado Harbor and ending at the National Park will take approximately 2 hours of travel.
Activities in Bunaken
Apart from enjoying the beautiful view of Bunaken Marine National Park from the mainland, there are various other activities you can do, namely snorkeling or diving. There are 23 dive sites that can be visited. For those of you who don't bring diving equipment, don't hesitate, because there are many diving equipment that can be rented at affordable prices.
If you don't want to dive, you can do tracking along the cliff path and climb the Manado Tua volcano, fish with local fishermen, and watch dolphins on the high seas.
Bunaken Marine National Park Fee
So, planning to spend your vacation to Bunaken Marine National Park? The following is a breakdown of the costs required:
Go on vacation and visit Bunaken National Park. The enchanting beauty of the underwater world will surely fill your thirst for adventure!
#DESTINATION #NATIONAL
Bagikan
Komentar