The Fact That The Dead Sea is Not an Ocean -->

The Fact That The Dead Sea is Not an Ocean 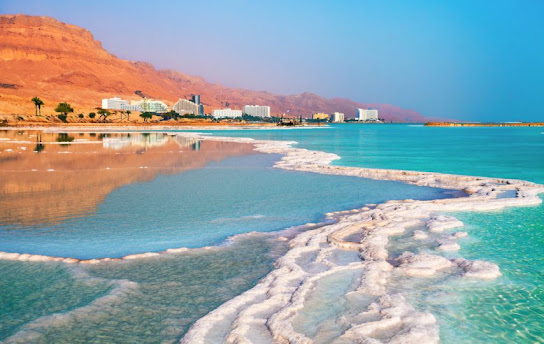 Drowning is one of the risks when you swim in the middle of the ocean. It's because you are dealing with big waves and waves. However, not all seas can make us sink, one of which is the Dead Sea in Jordan. Instead of sinking, you will still float, even without the aid of a float.
The Dead Sea is a lake that stretches in the area between Israel, Palestine, and Jordan. At 417.5 meters below sea level, it is the lowest point on the earth's surface.
Even though the name is Dead Sea, it turns out that this place is not an ocean but a lake with salt water. Uniquely, the Dead Sea tastes saltier than the original sea water. With a length of up to 50 km and a width of 15 km, the Dead Sea has a salt content of 33.7 percent or about 9.6 times saltier than ocean water. In addition, the Dead Sea is very high in sodium chloride.
The Dead Sea has been called the Dead Sea since the Roman Era by the Judeans. Because the Dead Sea water does not allow all forms of life, whether plants or living things. In the past, when the Jordan River flowed south from the Sea of ​​Galilee in the rainy season, reeds and fish were swept by the stream into the Dead Sea where the water was very salty. Neither fish nor algae can survive in water that is nearly 10 times saltier than most oceans. In other words, the Dead Sea is like a death trap for living things.
Initially, the Dead Sea was known as the Salt Sea which is mentioned in the Hebrew Scriptures to be precise from The Book of Genesis through to The Prophets and later writings.
It is called the Salt Sea because of the unique character of the Dead Sea, which is its very high salt content. So that it becomes a source of rock salt and sea salt. In the last Roman Era, salt was a highly valued and controlled commodity more than gold or silver. Roman soldiers were paid in salt, not in hard currency.
The Dead Sea is known as one of the saltiest bodies of water in the world and the deepest hypersalin in the world, because water flows into the Dead Sea but does not flow out. The water that enters the Dead Sea has no way out, but is trapped until it evaporates.
Due to summer temperatures and dry climatic conditions throughout the year, large amounts of water are lost due to evaporation. Water in the Dead Sea has lost 65,000 years of H2O sealma content. So that minerals are increasingly concentrated and salt is increasingly prominent. Launching Science ABC, the Dead Sea salinity level is close to 35 percent, the Dead Sea is one of the saltiest lakes on planet Earth.
Even so, in fact, many people visit the Dead Sea not just for fun. Apart from trying the sensation of floating on the water, in fact the water and mud from the Dead Sea are very useful for health, especially skin health.
This is because it is different from table salt, the salt in the Dead Sea is very bitter and can cure various skin diseases such as itching to acne. Meanwhile, Dead Sea mud is black mud that contains magnesium, sodium, potassium and calcium which is also very good for skin health.
Not surprisingly, many visitors compete to rub their bodies with mud and let them dry before finally being rinsed with salt water from the Dead Sea.
Even though you won't drown, you still have to be careful. You won't drown in the Dead Sea, but that doesn't mean you can go around in this place. Dead Sea Water remains dangerous to humans if not careful. For that, when visiting the Dead Sea, make sure you stay in a supine position with your face facing the sky.
Don't get in a prone position with your face facing the water because that is very dangerous. The density in the Dead Sea makes any kind of movement extremely difficult. Once you are on your stomach with your face facing the water, it will be difficult for you to turn over.
As a result, you will be drinking a lot of very salty water and it will irritate your kidneys and heart, even make it stop.
Bagikan
Komentar