The History of Palacio de Bellas Artes, A Magnificent and Beautiful Art Gallery of Neoclassical Architecture -->

The History of Palacio de Bellas Artes, A Magnificent and Beautiful Art Gallery of Neoclassical Architecture 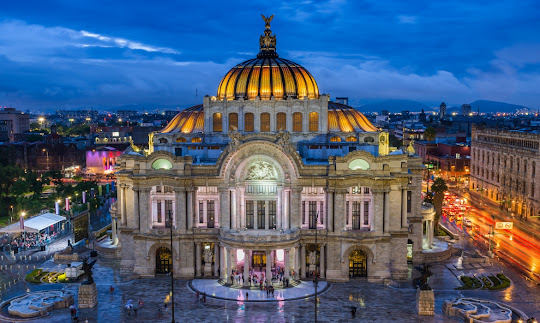 The Palacio de Bellas Artes is Mexico City's leading cultural center and an art gallery that has a very grand and beautiful Neoclassical architectural style. Apart from the beauty of its architecture, this building also offers various art performances from dance, music, opera and theater. In addition, this place also displays works of world-class photographers and painters. As a result, the Palacio de Bellas Artes was called the  "Cathedral of Art in Mexico".
This art nouveau building, which houses concert halls, a museum and murals of great Mexican masters, has witnessed political and social changes over the past 120 years in Mexico, which in turn can be glimpsed in its complex history. In addition, thanks to its spectacular architecture, the Palacio de Bellas Artes has been an icon of Mexico City's urban landscape for more than 80 years.
In the 20th century, the government of President Porfirio Díaz initiated a project to build a new National Theater worthy of the performing arts in the Mexican capital. The place chosen was the site of the old Santa Isabel Monastery, which was next to Alameda Central, which had closed in 1861.
The project for the new National Theater was designed by Italian architect Adamo Boari, who will also design the adjacent Palacio de Correos and the Temple of the Abolition for the city of Guadalajara. Construction began in 1904, and although the project was expected to be completed in four years, the lack of budget and technical challenges - in particular, that the structure was too heavy for the muddy soil in the area - progress was delayed, something that was only made worse. Likewise, the start of the Mexican Revolution in 1910. Due to armed conflict in Mexico, Boari returned to Europe in 1916 without completing the project: only the exterior of the building was almost finished.
Between 1917 and 1925 some people showed an interest in the project and the building, because it had entered the imaginations of the townspeople. However, the work was practically stopped until 1928, when it was resumed under the vision of the Mexican architect, Federico Mariscal. In 1932, the authorities proposed to broaden the vision for the structure of the theater to become a "national institution of an artistic nature" that would also house several museums and respond to public utility because of its high cost. Thus, the project received its current name. In 1934, 30 years after construction began, the Palace of Fine Arts finally opened.
The foundations and facades of buildings constructed between 1904 and 1912 are characterized by the famous art nouveau style, which reached its maximum splendor in the United States and Europe between 1890 and 1910. For the structure of the stables, the Boari used concrete and steel, a new technique of the era, and covered the whole. structure with marble. Italian architects also commissioned famous marble sculptures on the façade of sculptors Leonardo Bistolfi and André-Joseph Allar.
Although the Palacio de Bellas Artes stands out for its strong European influence, the design ultimately incorporates elements from Mayan and Mexican cultural imagery. The bronze sculpture on the dome is the work of the Hungarian sculptor Géza Maróti. In her work, four women represent four theatrical genres - drama, lyrical drama, comedy and tragedy - and on it we find a national symbol: an eagle devours a snake.
While taking control of the project, Federico Mariscal modified his original interior decoration plans and adopted an art deco aesthetic, which combines different materials such as onyx. Among the blacksmith's details, we find representations of Chaac and Tláloc, the respective gods of rain in Maya and Mexica culture, which are equipped with waterfall lamps and fountain lamps in them. In addition, in the arch of the side door we can find eagle warriors and jaguar warriors.
On November 29, 1934, the Museo de Artes Plásticas opened inside the Palacio de Bellas Artes, which is considered the first art museum in Mexico. The collection includes everything from 16th-century paintings to murals made by Diego Rivera and José Clemente Orozco that same year, as well as a Mesoamerican sculpture room, a Mexican print room, and popular art collections. In 1947, after the palace inspired the creation of the National Institute of Fine Arts - the government agency that monitors Mexican art -, the palace was renamed the National Plastic Art Museum, and since 1968 has been known as the Museum of the Palace of Fine Arts.
The jewels in the crown of the permanent collection are 17 murals painted by Diego Rivera, José Clemente Orozco, David Alfaro Siqueiros, Rufino Tamayo, Jorge González Camarena, Manuel Rodríguez Lozano, and Roberto Montenegro. Although the first mural painted at the Palace was created simultaneously by Rivera and Orozco in 1934, the oldest mural in the collection is Allegory of the Wind, painted by Roberto Montenegro in 1928 and moved to the museum in 1965.
These works include The Man Controller of the Universe (1934, also known as The Man at the Crossroads) by Diego Rivera. The muralist originally painted this composition for the Rockefeller Center in New York, but was destroyed because the painter included a portrait of the Communist leader Vladimir Lenin. In the museum we also find the Tormento de Cuauhtémoc diptych and the Apotheosis de Cuauhtémoc (1950-1951) by David Alfaro Siqueiros; Katharsis (19341-1935), key work by José Clemente Orozco, and Birth of our nationality (1952) by Rufino Tamayo.
#DESTINATION #INTERNATIONAL
Bagikan
Komentar