Temple of Great Happiness for Meditation and Seeking Serenity -->

Temple of Great Happiness for Meditation and Seeking Serenity 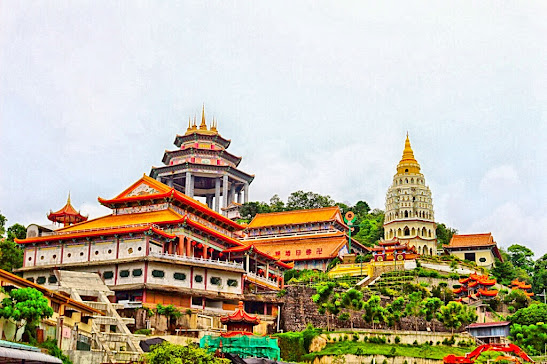 Malaysia is a federal state consisting of thirteen countries and three federal territories in Southeast Asia with an area of ​​329,847 square kilometers. The capital is Kuala Lumpur, while Putrajaya is the seat of the federal government. The total population of this country reached 30,697,000 in 2015.
Malaysia's favorite tourist attractions have many similarities with the Indonesian state. Starting from culinary, tradition, to culture. Despite the many similarities in the country, Malaysia remains one of the favorite holiday destinations for Indonesians.
When viewed from the cost of a vacation to Malaysia, it is indeed affordable like on vacation in Indonesia. In fact, the costs are much cheaper than tours to eastern Indonesia. The language is also almost the same so that Indonesian tourists don't have to worry about language barriers while on vacation here.
If Yesterday www.vanjava.net  discussed the Petronas Twin Towers , today Mimin will discuss the Kek Lok Si Temple. Kek Lok Si Temple is one of the most popular attractive destinations in a neighboring country that you must visit. A Temple of Great Happiness Suitable for Meditation and Seeking Serenity.
The largest Buddhist temple in Southeast Asia is located in the Air Hitam area, close to the Air Hitam Market. The location is close to the city of Penang, less than an hour from the city center if you are not in traffic, approximately two kilometers from Penang Hill.
Kek Lok Si Temple, or Temple of Supreme Bliss, strictly follows all the “rules” of “feng shui” that are accurate to the size of a shrine. In fact, this temple is very well known as a place to pray or meditate for religious leaders and Taoists in search of eternal life.
Kek Lok Si Temple has a history of being founded in 1893, influenced by the head of the religious leadership of the Goddess of Mercy Temple on Pitt Street. The project received a warm welcome from the Emperor of Manchuria, who later rewarded him with inscriptions and tens of thousands of Imperial Edition Buddhist Sutras. Prizes not only came from the Emperor of Manchuria, but also from the Ching Dynasty, namely Emperor Kuang Xi and Empress Cixi.
The construction of the Kek Lok Si Temple is still continuing, until the last one is a statue of Dewi Kuan Im which was first built since 2002.
The best time to visit Kek Lok Si Temple, which has a very tall and truly beautiful building, is during the Chinese New Year celebration, which from now on is no more than three weeks away. At that time, you will be amazed by the several thousand lanterns that emit light. Actually, the condition of Kek Lok SI Temple is not much different from the usual day, it's just that there are not that many lanterns. You can still enjoy the serene atmosphere through the prayer room, the pagodas that are stacked, the bell tower, and not to mention the turtle pond.
If you have a plan to visit Kek Lok Si Temple, come in the morning, when the air and your body are still fit and fresh, the sun is not strong yet. Because to get to the top of the temple, which is located in the hills, you have to climb a lot of stairs.
If it's New Year's holiday you haven't had time to vacation anywhere because almost everywhere in the country seems congested, you can change the schedule now.
#DESTINATION #NATIONAL
Bagikan
Komentar