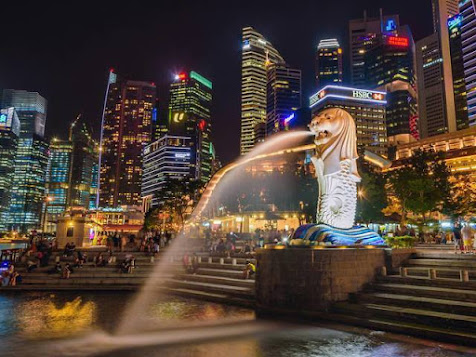 Singapore is still the most popular tourist destination for Indonesian tourists. Singapore is an island nation off the southern tip of the Malay Peninsula, 137 kilometers north of the equator in Southeast Asia. The country is separated from Malaysia by the Straits of Johor to the north, and from the Riau Islands, Indonesia by the Singapore Strait in the south. One of the tourist spots that they often go to is the Merlion Park.
Merlion Park is a major landmark and tourist attraction of Singapore, located in One Fullerton, Singapore, near the Central Business District. The Merlion is a mythical creature with the head of a lion and the body of a fish that is widely used as a mascot and the national personification of Singapore. You may have seen the image of Singapore's national icon, the Merlion with the head of a lion and the body of a fish.
Initially, the Singapore Tourism Board designed this park in 1964 as a landmark of the country of Singapore, but the official inauguration took place years after 1972 when the Merlion statue was installed. The fish's body symbolizes the city's humble origins as a fishing village. Its head reflects the country's real name, Singapore, or 'lion city' in Malay. The spray of water from the mouth of the Merlion Statue provides incredible views for all its visitors.
Now, you can see this legend at the Merlion Park. Shattering the water from its mouth, the Merlion statue stands 8.6 meters high and weighs 70 tons. This icon is a must-see for travelers visiting Singapore, just like other iconic landmarks around the world.
Built by local craftsman Lim Nang Seng, it was inaugurated on 15 September 1972 by Prime Minister Lee Kuan Yew at the mouth of the Singapore River to welcome all visitors to Singapore.
However, with the completion of construction of the Esplanade Bridge in 1997, the init statue was no longer clearly visible from the water's edge. The statue was relocated 120 meters from its original position in 2002 to its current location in Merlion Park, in front of the Fullerton Hotel and overlooking Marina Bay.
The park also contains a smaller Merlion statue. Known as the 'Merlion child', this statue rises two meters high and weighs three tons. The original and the cubs are the most famous of the seven Merlion statues recognized in Singapore.
Singapore officially has five Merlion statues, the first of course at the Merlion Park, the second behind the main Merlion statue (Merlion Park), the third at the Merlion Museum on Sentosa Island, the fourth on the Singapore Tourism Board. , and the fifth is at Mount Faber.
It's incomplete to have a vacation and visit the Merlion Park without taking pictures here. You can choose several favorite tourist spots, such as taking an angle by entering Marina Bay Sands as the background or taking pictures near the Merlion Statue. Get the best photos when visiting Merlion Park, you can come in the morning or evening. Because if during the day you will find scorching hot sun.
Enjoy and admire the bay. The gorgeous views that extend from the Merlion Park from across the Marina Bay Sands are not to be missed. You will be presented with iconic buildings and incredible stretches of sky.
A ride on a bumboat is a great way to take in the surrounding scenery. Start your journey on a bumboat from Merlion Park and explore the popular spots of Boat Quay and Clarke Quay along the Singapore River.
Do you know? The Merlion statue faces east which is believed to bring prosperity. This position was maintained even after relocation in 2002 to Merlion Park.
#DESTINATION #INTERNATIONAL
Bagikan
Komentar