Machu Picchu Is A Favorite Dream Destination in Peru -->

Machu Picchu Is A Favorite Dream Destination in Peru 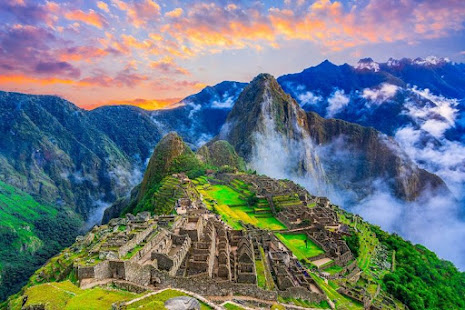 One of the places on earth that is the dream destination of many people is none other than Machu Picchu in Peru. Machu Picchu is a site of pre-Columbian Inca ruins located in a mountainous region at an altitude of about 2,350 m above sea level. Machu Picchu is above the Urubamba valley in Peru, about 70 km northwest of Cusco.
For Indonesian tourists, Peru is also a favorite destination because you don't need a visa to enter it. Machu Picchu is a relic site of the Inca Empire in Peruvian South America. In the form of a pile of rocks which are the remains of a resting palace that lies on a grass land at an altitude of 2,430 meters above sea level.
In Quechua (native language) Machu Picchu means Old Mountain. Machu Picchu was built on the orders of the King of the Incas at that time (9th king), Pachacutec, around 1450. The Machu Picchu complex consists of about 150 buildings and / or structures ranging from bathrooms, warehouses, temples and sanctuaries.
Machu Picchu was built using the ashlar technique, in which the pieces of rock that make up it are arranged in such a way that they do not collapse during an earthquake. If not, Machu Picchu would have been flat to the ground for a long time, because Peru is prone to earthquakes.
But it turns out that even though it is often called the lost city that was found, in fact Machu Picchu was never really lost. In fact, Bingham is not the first foreigner to visit Machu Picchu.
Until it became widely known by the public and became Peru's mainstay tourist destination, not many people knew about the existence of this old city on a mountain that is often covered in clouds. Its location even tended to be kept secret, especially when Spain conquered the Inca Empire.
Bingham was driven to the Machu Picchu location by a local guide named Melchor Artega. At that time the local residents there knew about Machu Picchu's whereabouts. Even some of the terraces on this site are used as land for farming. So it's not completely lost.
Some historians believe that a German adventurer Augusto Berns visited Machu Picchu some 40 years before Bingham's arrival. There are also those who claim that 3 Peruvian explorers Enrique Palma, Gabino Sanchez, and Agustin Lizarraga visited Machu Picchu in 1901.And 2 missionaries Thomas Payne and Stuart McNairn may have trekked to Machu Picchu in 1906, 5 years before Bingham.
Although Bingham may not have been the inventor of Machu Picchu as reported, it was he who was credited with opening a site that was neglected for 4 centuries and covered in dense vegetation. He also made detailed notes as well as mapped and photographed the site for several years. All of his efforts were later made into the book The Lost City of The Incas.
For several years the experts were confused and unable to conclude, is Machu Picchu a city, a fortress in the mountains, a place of religious worship, a place of king's ordination, a place of rest, or a royal palace? Later archaeologists agreed that Machu Picchu was the resting place of the Inca royal family.
This site of ruins of a building from the Inca civilization is precisely located above the Urubamba valley, which is now part of Peru. The peak of Machu Picchu, which in the local language means the old peak, is at an altitude of 2,430 meters above sea level.
For nearly a century the Peabody Museum at Yale University held thousands of artifacts found at Machu Picchu by Bingham. After years of debate over who was entitled to the artifacts, Yale University finally returned them to Peru in December 2011. Among the artifacts were human bones.
In the background of Machu Picchu stands the Wayna Picchu Peak that rises like a cone, and its presence is what makes Machu Picchu's photos even more spectacular. Tourists can hike Wayna Picchu but it is limited to 400 people per day. The path is steep and quite difficult, especially you have to be extra careful when going down. From the top of Wayna Picchu, Machu Picchu is seen as just a jumble of regular rocks. So the best view of Machu Picchu that we often see is from below, with Wayna Picchu as the background. To get to the best position, you don't need trekking. So if someone says trekking to Machu Picchu is wrong!
From various interesting facts about Machu Picchu, the following will likely make a Traveler even more interested in visiting Machu Picchu immediately.
#DESTINATION #INTERNATIONAL
Bagikan
Komentar