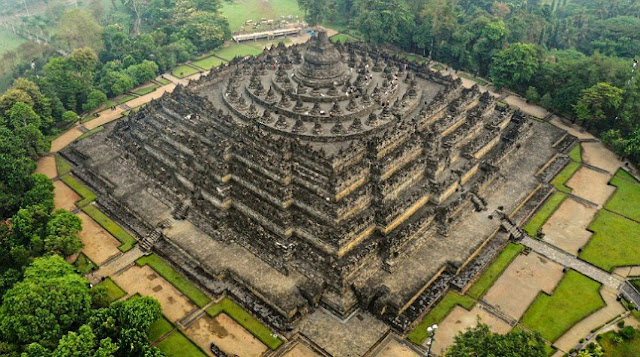 Indonesia, also known as the Unitary State of the Republic of Indonesia or simply the Republic of Indonesia, is a country in Southeast Asia which is crossed by the equator and is located between the continents of Asia and Australia, and between the Pacific Ocean and Indian Ocean.
Tourist attractions in Indonesia are not only famous domestically but also internationally. World tourists are even competing to come to this famous tourist spot in Indonesia. The country of Indonesia does have very beautiful tourist attractions, starting from Sabang to Merauke.
Apart from having many types of flora and fauna, Indonesia also has a variety of cultures to historic buildings that are very unique and attractive to local and foreign tourists. In addition, the beauty of its beaches and beautiful mountains, as well as the culture that is still preserved, makes tourists not bored to get around Indonesia.
One of the historical buildings that are popular in Indonesia is the Borobudur temple. Borobudur is a Buddhist temple located in Borobudur, Magelang, Central Java, Indonesia. This temple is located approximately 100 km southwest of Semarang, 86 km west of Surakarta, and 40 km northwest of Yogyakarta.
The Sailendra dynasty built the largest Buddhist heritage in the world between 780-840 AD. The Sailendra dynasty was the ruling dynasty at that time. This legacy was built as a place of Buddhist worship and a place of pilgrimage. This place contains instructions for humans to distance themselves from the lusts of the world and towards enlightenment and wisdom according to the Buddha. This legacy was discovered by British troops in 1814 under the leadership of Sir Thomas Stanford Raffles. The temple area was completely cleared in 1835.
Borobudur was built in the Mandala style which reflects the universe in Buddhist beliefs. The structure of the building is square with four entrances and a circular center point. When viewed from the outside to the inside it is divided into two parts, namely the realm of the world which is divided into three zones on the outside, and the realm of Nirvana in the center.
As the largest Buddhist temple in the world as well as the largest Buddhist monument in the world, according to the Ministry of Education and Culture's website, Borobudur Temple has a structure like a punden with steps that are getting smaller and smaller with four stairs in each direction of the wind.
Borobudur Temple has a length of 121.66 meters with a width of 121.38 meters and a height of 35.40 meters. According to Buddhist philosophy, the level structure of Borobudur Temple is an imitation of the universe of the wheel of life. There are three levels in the structure of Borobudur Temple, namely:
1. Kamadhatu
Kamadhatu consists of 160 reliefs that explain the Karmawibhangga Sutra, the law of cause and effect. Describes human nature and passions, such as robbing, killing, raping, torturing, and slander.
The covering at the bottom has been permanently opened so that visitors can see the hidden reliefs at the bottom. A photo collection of all 160 relief photos can be seen at the Borobudur Temple Museum located in the Borobudur Archaeological Park.
2. Rupadhatu
The middle part of the temple, which symbolizes the intermediate realm, depicts human behavior that has begun to abandon worldly desires, but is still bound by the real world. Rapadhatu consists of stone relief carving galleries and buddha statues. Altogether there are 328 Buddha statues which also have decorative reliefs on their carvings.
According to the Sanskrit manuscripts, this section consists of 1300 reliefs in the form of Gandhawyuha, Lalitawistara, Jataka and Awadana. All of them stretch for 2.5 km with 1212 panels.
3. Arupadhatu
The top of the temple, which symbolizes the upper realm, depicts the intangible element and as a sign of levels that have left worldly desires.
The porch in this section consists of a circular stupa with a hole, an inverted bell, containing a Buddha statue that leads to the outside of the temple. There are 72 stupas in total. The largest stupa in the center is not as tall as the original version which is 42m above the ground with a diameter of 9.9m. In contrast to the stupas that surround it, the central stupa is empty and raises a debate that there is actually content, but there are also those who argue that the stupa is empty.
Unique Facts of Borobudur Temple, in addition to the history and moments of Vesak that have attracted foreign attention, Borobudur Temple has a number of unique facts including:
That is the history of Borobudur Temple and the unique facts that you can find out. If Treveler visits Borobudur Temple, take care of it so that it is taken care of and not extinct.
Always remember to maintain your attitude and behavior and dare to reprimand other visitors when they see acts of vandalism such as littering, throwing cigarette butts into the stupa of statues, committing acts of vandalism.
#DESTINATION #INTERNATIONAL
Bagikan
Komentar