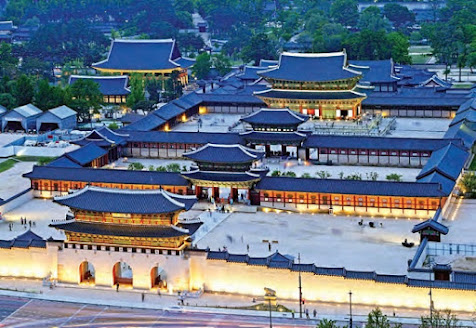 Republic of Korea or commonly known as South Korea or South Korea is a country in East Asia which covers the southern part of the Korean Peninsula. To the north, the Republic of Korea borders North Korea, where the two united as a nation until 1948.
For those of you who like history, you must visit Gyeongbok Palace. The largest palace of the Joeseon Dynasty is located north of Seoul. Gyeongbok Palace was founded by an architect named Jeong Do Jeon.
Gyeongbok Palace is a palace located north of Seoul, South Korea. This palace is one of the five great palaces and is the largest built by the Joseon Dynasty. Gyeongbok Palace was originally founded in 1394 by Jeong do jeon, an architect.
The palace was destroyed during the Japanese invasion of Korea in 1592-1598 and was rebuilt during the 1860s with 330 complexes and 5,792 rooms. Gyeongbok Palace is a symbol of the majesty of the kingdom and people of South Korea. This palace has an area of ​​410 thousand square meters.
The main buildings of Gyeongbok Palace include Geunjeongjeon. The King's Throne Room which is a national treasure of South Korea and the Gyeonghoeru Pavilion which has a lotus pond. Gyeongbok Palace is currently open to the public and the National Folk Museum of Korea stands inside.
This palace is also referred to as The Northern Palace because of its location at the northernmost of the other palaces. Gyeongbokgung Palace is also close to other tours in Seoul such as Buckon Village and Gwanghwamun Square.
Along the road to this palace, a traveler will see many tourists, the majority of whom are from abroad, walking around and taking pictures while wearing Hanbok, or typical Korean women's clothing. This is reasonable considering that along the road and outside the palace there are many Hanbok rental outlets of various shapes and colors along with their accessories. In fact, at the same time with hairdressing services so that the appearance of tourists like a princess is more perfect.
For foreign tourists, especially those for the first time coming to South Korea, of course they don't want to waste the opportunity to experience how to look like a princess. Almost every corner in the Gyeongbok Palace complex can be used as an Instagramable photo spot. So, it would be a natural sight for a traveler to see tourists taking pictures in almost every place allowed in this palace. Gyeongbok Palace is one of the five major palaces in South Korea.
Not only enjoying the beauty of the building, studying history, and taking photos of the princess' style, in this palace there is also a procession of changing palace officers or royal guards which can be held several times a day. Tourists can watch the procession firsthand. This procession was followed by dozens of palace guards, complete with their costumes and attributes, as is usually shown in South Korean colossal films or dramas.
The vast palace building is very grand and beautiful. Every few hours, you can also see the opening and closing performances of the Royal Palace Gates and the changing of the palace guards. Not only that, visitors can also explore and take pictures at Gyeongbok Palace while wearing hanbok.
If you want to rent a hanbok, you can pay 20,000 won or around 236,000 rupiah. However, we don't need to pay for the Gyeongbokgung entrance ticket.
Meanwhile, if we don't want to rent a hanbok, we have to pay an entrance ticket for 3,000 won or around 35,000 rupiah.
#DESTINATION #NATIONAL
Bagikan
Komentar