Elbphilharmonie, The largest and Most Sophisticated Concert Hall in The World -->

Elbphilharmonie, The largest and Most Sophisticated Concert Hall in The World 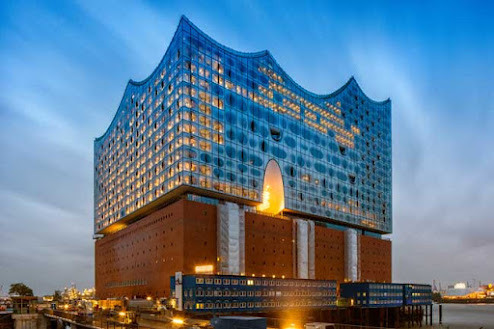 If you mention the name of the city of Sydney, surely one of them is the magnificent and beautiful Sydney Opera House that comes to your mind right ?. In Hamburg, there is also a magnificent music opera house, the name is Elbphilharmonie. Elbphilharmonie, also known as Elphi, is a concert hall in the HafenCity district in Hamburg, Germany, on the Grasbrook peninsula on the Elbe River. Elphi not only excels in the design of the building and its grandeur, but is also full of controversial issues behind it that have caused the construction of this building from 3 years (which was planned) to be delayed to almost 10 years.
When traveling to the City of Hamburg, it will be a huge loss if you don't visit this city icon. It is on the peninsula of the Elbe River. Just look at the name, there is still Elbphilharmonie.
Equipped with the most advanced acoustic space on earth with its building architecture that resembles a boat sail, roaring waves and icebergs, Elbphilharmonie, one of the best concert halls in the world, sits on the banks of the Elbe River, Hamburg Germany.
With a height of 108 meters, this building also includes 244 hotel rooms and 45 luxury apartments. Its distinctive building is a representation of the amalgamation of medieval Hamburg and today's Hamburg.
On the outer surface of Elbphilharmonie, 1000 crystal glass windows and a corrugated roof are presented. Even without having to enter it, millions of tourists visit this tourist spot to simply take pictures with its magnificent building as a backdrop.
Inaugurated in 2016, Elbphilharmonie has three concert halls, with the largest room with a capacity of 2100 spectators. The walls in the special room are designed with 10 thousand special plates that can distribute sound throughout the room with even and equally good quality.
Not surprisingly, the Elbphilharmonie concert hall is said to have the most advanced and largest acoustic technology in the world. The hall filled with the most stunning architectural works is the newest landmark in the city.
The building is a dim version of the dream of the German architect, Bruno Taut. He had sketched a glass room on a mountain amid absolute peace and beauty. Elphilhamonie, nicknamed Elphi, is a crystalline music palace above a large warehouse on the Grasbrook Peninsula near the Elbe River.
Located in the HafenCity neighborhood in Hamburg, Elphi is 110 meters high and offers the most impressive views, with a gleaming wave-shaped facade. Seen from the city center, the glass structure is like a cloud on a cliff, being bigger than the brick shed at the base.
A gently curved elevator takes you from the lobby to the interior of the glass palace. Between the concert hall and warehouse is the 'plaza'. The square offers city residents a panoramic view of the city. A curved elevator takes you from the base of the lobby to the glass palace.
The true beauty of Elbphilharmonie lies in its beautiful central auditorium which is considered to be the most acoustically advanced space ever built. The auditorium which is a bubble and cave is built with 10,000 unique acoustic panels. Each of the 10,000 panels is individually designed with a parametric design.
Each panel is beautiful because it contains a small shell-shaped structure. This structure helps form sound as it moves through the auditorium. Each panel absorbs and reflects sound in a unique way. Accented by 1,000 glass light bulbs, this auditorium has a capacity of 2,150 people. Surprisingly, none of the seats were more than 30 meters from the stage.
The company behind the impressive panel design is “One to One”, who also works for Philharmonie in Paris. Founder Benjamin Koren stepped up to Yasuhisa Toyota for this extraordinary project. Toyota has been the principal acoustics for more than 50 projects worldwide, including the Walt Disney Concert Hall. He created the optimal sound map for the proposed auditorium design. Using the Toyota design, Koren developed an algorithm for the panel parametric design.
Most acoustic music halls are not built overnight. This is the product of 13 years of hard work. As well as the One to One and Toyota experiences, the Salon is a masterpiece of Swiss architecture. Created in collaboration with Swiss architectural studio Herzog & de Meuron, the Philharmonic is a $ 843 million project.
To visit Elphi and just look around the Plaza and eat and drink at the restaurant, a traveler only needs to queue to pick up a ticket at the entrance (FREE), if we don't want to queue, you can buy an online ticket paying 2 euros. But to buy tickets to a music concert held at Elphi, you have to buy it in advance (if there is a promo, usually it can be cheap, but the seats are corner. To see the types of music concerts being held and the ticket prices as well as the booking, you can visit the website. elphilharmonie.
#DESTINATION #INTERNATIONAL
Bagikan
Komentar