The Most Beautiful Hidden Tourist Spots in Japan -->

The Most Beautiful Hidden Tourist Spots in Japan 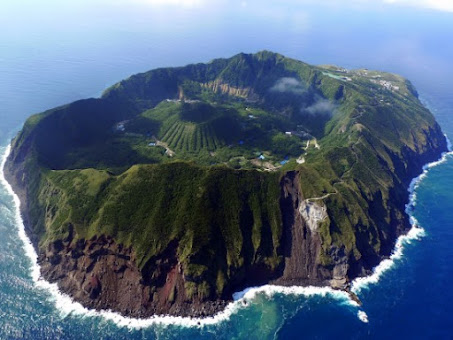 Aogashima Volcano, Jepang
Have you ever imagined what it is like to live in a giant volcanic crater? If you think such dwellings exist only in a fictional world, then you should take a look at Aogashima Island in Japan. Even though it is located in the Tokyo area, Japan, Aogashima Island has a condition far removed from the modernity of the metropolitan city. In fact, there is no internet access on this island which is quite dangerous to live in. There are actually about 200 inhabitants who inhabit the volcanic crater of this extreme and dangerous place. There is only one school and one post office there.
Aogashima is part of the Izu Islands, about 300 kilometers south of Tokyo, in the Philippine Sea. Even though it is about 300 km away from Tokyo, Aogashima is part of the Tokyo area and administratively falls under the Tokyo Prefecture government.
The shape of Aogashima Island is quite unique, like a pudding that is upside down on a plate or a donut with a strange pattern. But Aogashima is really a volcano with a giant crater which is an island and can be inhabited by humans. Aogashima Island is formed by four overlapping caldera. That is, inside the caldera there is another caldera.
When viewed from above, the shape of Aogashima Island is like a large bowl surrounded by high and steep cliffs.
Life on the island of Aogashima is far from modern civilization, which is full of the hustle and bustle of activities that keep its people busy. There, diving is the most popular activity in the clear blue waters which are more suitable as a place to relax than to work hard.
Apart from diving, hiking and camping are other great outdoor activities to do in Aogashima. Some people also like to enjoy the public sauna which is obtained from the hot steam around the middle of the island.
For accommodation, on this island there are several small and simple bed and breakfast (B&B) inns. Apart from that, you can relax in the sauna. You can also hike in Maruyama and see a view of flowers, trees and wildlife, if you're lucky, said the Japan Guide page.
It was very quiet and dark there, there were no houses or even street lights, so the sky would be brighter because there was no light pollution. The place is also quiet and far from noise pollution. You can also do stargazing at Oyamatenbo Park.
There may only be one drawback to Aogashima Island, access to and from there doesn't have many options. The volcanic crater civilization can only be reached by ferry and helicopter. After arriving at the island, visitors should also keep an eye on the weather before finally being able to go around enjoying the beauty of Aogashima.
The mountain on this island itself last erupted in 1785. At that time, the eruption killed around 140 people out of 375 people who inhabit Aogashima Island.
Quoting Geologyin, even though the mountain on Aogashima Island is included in a class C volcano, this mountain still needs to be watched out for because it could erupt at any time.
However, the inhabitants of Aogashima Island live quietly on this remote island which has only one post office, one elementary school, and one middle school. In fact, most of the population lives in the crater wall. Generally, they live from farming, although there are also some residents who become government employees. In fact, they already know the story about the massive eruption of Mount Augoshima. However, they still survive to live on the island.
If you are interested in having a vacation to Aogashima Island, you have to be careful and watch the weather before walking around, because the mountain is still active, there is a possibility that the mountain will erupt again without knowing when the time is. But if you like to take risks, just fly over there and enjoy the beauty of Aogashima!
#INTERNATIONAL #TOUR
Bagikan
Komentar