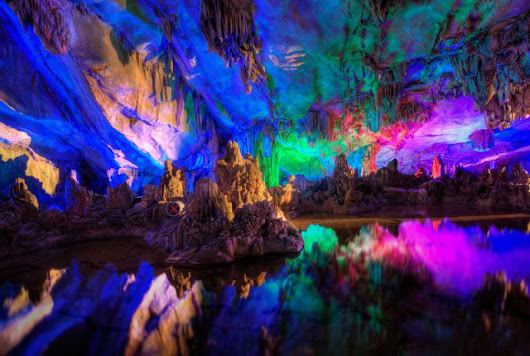 Reed Flute Cave in Guilin (China)
China always presents a variety of tourist attractions that always attract tourists, such as colorful caves in Guilin. Called the Reed Flute, this cave is surrounded by stunning karst mountains and beautiful countryside.
Guilin, with its breathtaking karst mountains and picturesque countryside, is one of the most popular tourist destinations in China. Inside the Reed Flute Cave there is a beautiful and clear lake. Find out more about Guilin's incredible Reed Flute Cave, a colorful, must-see geological wonder.
Reed Flute Cave in Guilin is the most unique tour in the world. One of the most recommended tourist attractions to visit when traveling to China. It is called the most unique tourist spot in the world because this cave has stalagmites and stalactites. No exaggeration of the nickname, because the cave is indeed very beautiful and is shaped like a palace which is increasingly beautiful with the addition of colorful lights. Visitors who are busy arriving have made the cave one of the mainstays of the city of Guilin, and of course China.
Reed Flute Cave, located about 5km from the city of Guilin, was formed more than 180 million years ago due to water erosion which eroded the limestone layer on the earth's surface with a height of up to 240 meters.
The Reed Flute Cave is full of stalactites and stalagmites as well as natural stone pillars named after the surrounding legend. For example, Crystal Palace, Fish Tail Peak, and Dragon Pagoda. Each part has its own unique shape and is not made by humans.
Interestingly, there is one of the giant stalactites that is shaped like a giant spear used by Monkey King Sun Wu Kong while traveling west.
Uniquely, this cave has been popular for thousands of years. This is evidenced from the inscriptions found on the cave walls which indicate the year 792 AD. In the inscription it is written that the Reed Flute has been the prima donna since that year, which means that it has happened since 1,200 years ago. To prove it you can come directly there.
Inside the cave there are more than 70 inscriptions written in ink, made around the time of the Tang Dynasty in power in 618-907 AD. Not only that, the cave walls also have calligraphy inscriptions, poetry, and travel records from the 8th century Tang Dynasty. The Chinese version of calligraphy that adorns the walls is thought to have originated from the Middle Ages.
Apart from Guilin, areas such as Guangxi, Guizhou, and Yunnan in Southern China also have many caves. However, only in Guilin has a cave that is very amazing.
The Reed Flute Cave is relatively close to downtown Guilin, only 5 kilometers from the city center, and easily accessible via city bus route 3, making it perfect for a half-day excursion during your stay in the city. The Reed Flute Cave is open year round from 8:00 am to 5:30 pm, but expect huge crowds during national holidays such as May 1, October 1 and Chinese New Year week. Plan on about two hours to visit, and remember to bring a light jacket or sweater, as it can be cold and damp underground. The cave is relatively easy to walk for children and the elderly, without many steep inclines. Take the actual reed flute home as a souvenir, you'll find it for sale outside the cave.
#INTERNATIONAL #TOUR
Bagikan
Komentar